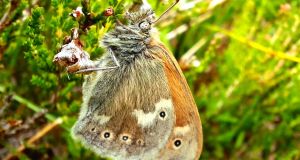 One of the Large Heath Butterflies recorded in Co Kildare. Photograph: Tristram Whyte

Conservationists have recorded a substantial increase in an endangered species of butterfly whose numbers act as a crucial indicator of the health of Irish bogs.

While the number appears small, it gives some insight into how many are present in the environment, itself an important sign of the health of the land and its plant species.

“There is little known about this butterfly so to have 43 just along our route was very positive,” explained IPCC Campaign Officer Paula Farrell.

“They are an indicator species; they tell us a lot about the quality of our bogs...if the numbers go down or deteriorate it would make you wonder is there is not enough plants for them, or is the bog drier.”

The IPCC set about recording the Large Heath Butterfly in 2017 in partnership with the National Biodiversity Data Centre to establish a scientific monitoring strategy.

Restricted to wet peatland habitats, their abundance gives insights into various aspects of the surrounding ecosystem.

When peatlands are drained it affects the plant community which can have an impact on the butterfly population.

Last year’s count of 18 may have reflected the comparatively poor weather conditions. This year, the butterflies were counted on four separate inspections of a pre-mapped walking route, with 29 observed on one single occasion.

The species is confined to bog habitats and has lost much of its natural environment due to drainage, afforestation, peat extraction and turf cutting. It is listed as threatened in the Red List of Irish Butterflies published in 2010.

This year they have returned to peatlands in the Manchester area of England 150 years after they were deemed locally extinct, following the drainage of land for agriculture and peat extraction.

The IPCC was established in 1982 following a debate on the future of Irish bogs. Based at the Bog of Allen Nature Centre in Rathangan, Co. Kildare, the organisation has over the years established a network of peatland nature reserves made up of various bog habitats.