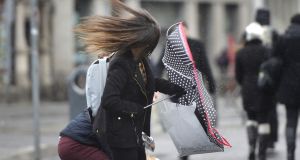 Very windy weather is forecast for parts of the north and west this weekend. File photograph: Alan Betson/The Irish Times

Met Éireann has issued a weather warning for parts of the west and north of the country for Saturday night, with very windy weather expected in these areas.

The status yellow wind warning was issued for Connacht and counties Clare and Donegal on Friday and is set to be in effect from 10pm on Saturday until 8am on Sunday.

Met Éireann said that the areas included in the warning can expect very windy weather during the period in question, with south to southwest winds, veering westerly, forecast to reach mean speeds of 50 to 65km/h. Gusts of 90 to 110km/h are also expected in these areas on Saturday night.

The UK Met Office has also issued a wind warning for counties Antrim and Derry for this weekend. This status yellow warning is in effect from midnight on Sunday until 4pm that day.

In terms of the national outlook for the weekend, Met Éireann said that there will be outbreaks of rain and drizzle overnight on Friday, with lowest temperatures during the night ranging from 10 to 14 degrees.

Saturday will begin mostly cloudy and misty, with further outbreaks of rain and drizzle during the day. These outbreaks will give way to a spell of persistent rain in the north and west by evening, as south and southwest winds begin to freshen. Maximum temperatures during the day will be between 16 and 20 degrees.

Saturday night will see strong winds and gales developing on coasts. Outbreaks of rain overnight will push eastwards, with some heavy falls in Atlantic coastal counties. Minimum temperatures overnight will be between 9 and 12 degrees.

Sunday will have a very windy start, but it will be brighter than recent days, with sunny spells. The day will see scattered blustery showers, most frequent in the northwest of the country. Highest temperatures during the day will range from 14 to 18 degrees.

Sunday night will see clear spells and isolated showers, with lowest temperatures between 8 and 11 degrees.