Study of over 1,100 sites finds condition deteriorating due to human activities 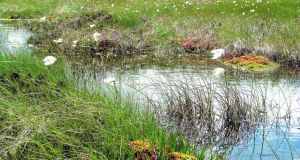 Ongoing turf cutting in one third of Irish bogs is contributing to the “shocking degradation” of the country’s peatlands, a new 10 year research report has found.

The study, looking at 1,182 separate sites, has found their condition has continued to deteriorate.

Carried out by the Irish Peatland Conservation Council (IPCC), the findings will help inform a Peatlands and Climate Change Action Plan 2021-2030, funded by Friends of the Bog and due to be released later this year.

“The situation has gone way down. They are still deteriorating, they are not improving, they are being impacted by many human activities,” said Paula Farrell, IPCC campaign officer.

Such deterioration means the peatlands are not as resilient to the impacts of climate change.

Ms Farrell explained that, while peatlands have been storing carbon since their formation about 10,000 years ago, their drier conditions now threaten to turn them into a source of carbon being released into the atmosphere.

Human activity is a major concern – blanket bogs typical in the west of Ireland and in mountain regions are being fragmented by forest plantations, turf cutting and poorly cited wind farms.

The review found that 33 per cent of sites have been affected by turf cutting and 36 per cent by drainage activity.

A “staggering” 53 out of 89 blanket bogs listed as special areas of conservation have felt the effects of turf cutting.

“We know that peatlands are very important but are people taking it very seriously?” said Ms Farrell. “They are linked to our past but we do have other options now – we don’t need to take the turf or peat for home heating. We can protect these as habitats.”

The council has also warned in its findings that many people who use moss peat in their gardens may be unknowingly contributing to the problem – much of the product is sourced from raised bogs.

The issue of turf cutting and other extraction has long been controversial in Ireland – torn between opposing arguments for the need for environmental protections and a respect for centuries-old Irish tradition. The Council says the conditions of peatlands warrant stricter regulations.

“Centuries of human use of peatlands have caused the loss of over 70 per cent of the habitat and are continuing to degrade sites that should be protected for their biodiversity, water regulation and carbon storage and sequestration functions,” it said.

Its concern, according to Ms Farrell, is that a major change to the environment would mean a change in plant species that would, in turn, threaten animal species.

The Council notes that about 57,400 tonnes of carbon is stored each year by intact bogs.

Draining reverses this, releasing stored carbon and other greenhouse gases into the atmosphere.