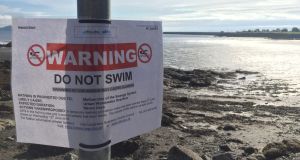 A no-swim notice was in place across the entire south Dublin coastline last week following a sewage overflow at the Ringsend wastewater treatment plant due to heavy rainfall.

Dún Laoghaire-Rathdown County Council has confirmed that the swimming ban placed on its beaches has been lifted.

Dublin City Council said bathing restrictions remained in place at Dollymount, while they have been lifted at Sandymount and Merrion Strands. Water quality samples were taken at the beaches on Friday.

Further sample results for Dollymount are expected on Wednesday and the temporary restriction will be reviewed again then.

A no-swim notice was in place across the entire south Dublin coastline last week following a sewage overflow at the Ringsend wastewater treatment plant due to heavy rainfall.

Irish Water said sewage overflows at the Ringsend wastewater treatment plant happen around 15 times a year, “but mostly in winter, outside the bathing season, when the rainfall is heavier”.

The utility said there was a “storm water overflow” from the plant for two hours over the course of Tuesday and Wednesday last week.

A spokeswoman said “there is potential” for an overflow to occur again over the summer period if there is “extreme rainfall”.