As the clouds become more rain-laden, we’ll have to count on blocking highs from Siberia 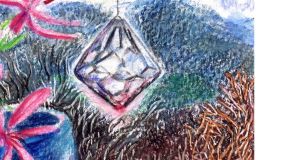 It takes a good while for the sun to clear the mountain these mornings. But when we’re lucky, it strikes the crystal hanging in the window and flashes of rainbow are sprayed around the living room. A mere puff of breath can set them whirling on walls and bookshelves and paintings in brilliants blues and pinks and greens.

The crystal was a gift from a perceptive friend with a feeling for fragilities of mood that can come with any serious convalescence. That’s long enough ago for the crystal to need the odd polish, but as western winters settle into climate change, its magical light show still redoubles any welcome return of the sun.

The daily arrival of sunlight and its predictable duration are among the few certainties left in the world. Sunshine, however, is quite a different thing, and one wonders how dimming by clouds, or intensification as temperature rises, will change the current norms offered by Met Éireann.

They work to a good margin. Ireland “normally” gets 1,100-1,600 hours of sunshine each year, most of it in the extreme southeast and the least on cloud-topped mountains of the west, such as Mweelrea above us. Rosslare is where to live (or maybe not: I’ve never been), with daily bright sunshine averaging almost 1.9 hours in winter, 5.3 hours in spring and 6.1 hours in summer.

December is the dullest month, no surprise, and northern counties are lucky to get an average hour in the day. As western clouds become more rain-laden and darker in winter, we’ll have to count on the new blocking highs from Siberia – and even some albedo from a droshky or two of snow – to stave off the trials of seasonal affective disorder (SAD).

All this sent me back to exploring Ireland’s sun worship, so well-developed and respected until St Patrick gave forth in his Confession: “All those who adore [the sun] shall descend into misery and punishment.”

It is hard to imagine the depth of human awe in the pristine, pagan natural world. Few people now can see as many stars with their own eyes, or experience such total, raw innocence of wonder at the night sky. Millions have lost any sense of the connection between the passage of the sun and food on their plates.

Ireland was suffused with sun worship, its solar rites and bonfires echoing those of the early, seafaring Phoenician settlers. For example, their sun-god, Baal, lives on in Bealtaine, the “fire of Baal” in May.

Irish mythology is a seductive overlay of history. The many actual north African pagan parallels and borrowings are widely expressed in stone monuments such as stone circles and even today’s sean-nós singing of Connemara. Those affecting intonations are what impelled Bob Quinn on a quest in documentaries for television and his book The Atlantean Irish (Lilliput Press, 2005).

The cosmic inspiration of this island’s great pagan mounds still draws popular assemblies to Ireland’s meaningful solar moments. An official lottery fills places in the inner chamber of Newgrange at the sunrise of the winter solstice – December’s gathering was drawn from 28,595 entries from all over the world.

In the latest Archaeology Ireland, always an engaging and rich magazine, Clare Tuffy shares her own deep response to these occasions as the OPW’s “visitor services manager”. “I can say with hand on heart,” she confides, “that there is no more special place to be than on top of Loughcrew Carnbane East, waiting for dawn when skies are clear . . . ”

When the one over Mayo is far from clear, and the crystal loses its lustre, I resort to basking in the beams from a daylight bulb above my desk. And as early dusk threatens, I am known to watch television property programmes that offer places in the sun. A dogged stream of bargain-hunting Brits still search for a house in Andalusia or Florida, guided by earnestly hopeful young presenters.

Cool caverns of Spain’s hill villages, stark niches in the cliffs of coastal apartments, outsize American spaces inside vast-windowed villas of golf-land: I trail along through kitchens and bathrooms for the sake of the brilliant terraces, gleaming beaches, the occasional shimmering view.

Schadenfreude tempts me in questions nobody asks. In southern Spain, how hot will summers be when blasts from the Sahara have melted all the polytunnels and the last moist aquifer runs dry?

In Florida, what’s the height above sea level and how well is the roof screwed on? A study by the Union of Concerned Scientists predicts that, by 2045, about 64,000 of today’s residential Florida properties are at risk of chronic inundation.

Even at Mar-a-Lago, your man’s winter palace, water has lapped at the approach roads and will drown his golf course entirely by the end of the century. Sooner might do better.