Ireland not included among the 27 members of ‘High Ambition Coalition’ 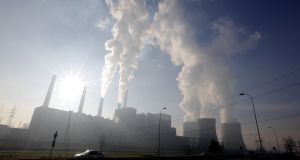 Steam rising from the cooling towers of a coal-fired thermal power plant in Tuzla, Bosnia and Herzegovina. Photograph: Fehim Demir/EPA

The UN climate talks have received a much-needed injection as they enter their final hours, with an alliance of 27 countries promising to step up efforts to tackle climate change under the Paris agreement.

The alliance, which includes Canada, France and Germany, declared that the recent landmark UN Intergovernmental Panel on Climate Change report was a stark warning and served “as an urgent call to increase ambition and strengthen efforts”.

Ireland was not included among the members of what was called the “High Ambition Coalition”.

This was an indication that Ireland is “very slow to move from laggard to leader when push comes to shove”, said climatologist Prof John Sweeney, who is an observer at the COP24 summit. “The first opportunity to demonstrate intent has been rejected.”

However, he accepted that Ireland’s position tallied with what Minister for Climate Action Richard Bruton had indicated at a meeting in Katowice with Irish NGOs, where he confirmed that climate commitments would be made when he was sure they could be delivered on.

The alliance move has given negotiators more momentum in trying to get an agreement across the line, following a difficult day on Wednesday when UN secretary-general Antonio Guterres warned delegates that failure would send a “disastrous message”

The talks officially end on Friday, although may extend into the weekend due to the current deadlock. Some negotiators have warned that there remain too many loose ends to enable a final text to be agreed.

Saudi Arabia added to the tensions with a strongly-worded statement on Wednesday night, warning about a “sharp deviation from the provisions agreed in Paris” as their energy minister Khalid al-Falih called for more investment in fossil fuels.

The alliance has committed to taking actions to enable the world to stay within a 1.5 degree rise in global warming.

The move has re-energised discussions though issues remain on climate finance for poorer countries, including the issue of “loss and damage” as a consequence of climate change.

While Ireland may not have joined the ambition alliance, it has agreed to strengthen and extend carbon pricing in Europe. This is being undertaken with Denmark, UK, Finland, France, Sweden, Portugal, the Netherlands and Italy.

The signatories to the initiative share the view that carbon pricing, along with supporting policies and measures, is essential to provide economic agents “with a clear long-term signal” to incentivised cost-effect reductions in greenhouse gas emissions – and in turn to disincentivise new investments in carbon intensive technologies.

The signatories believe that co-operation at the European level could increase the economic and climate effectiveness of carbon pricing.