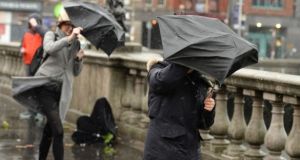 A “severe” weather event is predicted for one of the biggest shopping days of the year as well as a weekend rugby clash expected to draw tens of thousands of fans, forecasters have said.

Heavy rain and driving winds overnight, mainly affecting the south of the country, are expected to ease later on Thursday but there is little respite in store, and worse is thought to be on its way.

While status yellow wind and rain warnings for much of southern Munster are to set expire into the evening, Met Éireann is already poised to issue separate warnings for the weekend.

“We’ve been looking at this all week — the guidance is chopping and changing — but Saturday is the one day we have been concerned about,” said Liz Walsh, forecaster with Met Éireann.

The penultimate Saturday before Christmas is one of the busiest shopping days of the year, and this year it includes Leinster’s Heineken Cup tie with Bath at the Aviva Stadium in Dublin.

“It does look as if there will be severe weather,” said Ms Walsh.

“We will probably put out a warning, as we are looking at a high risk from both rain and wind.

“It is difficult to pinpoint at this stage where will be hardest hit, but at the moment it looks like the south and the east — and possibly very windy in the east.”

After a lot of rainfall overnight in the south — with Valentia in Co Kerry “sticking out like a sore thumb” with 23mm of rain fallen — Waterford, Wexford and east Cork could see more of the same during the day.

The Wicklow Mountains “could get a good dump of rain” too.

Elsewhere, there will be scattered patches of rain and drizzle, more persistent in east Munster and south east Leinster.

While it is expected to ease off later, there will not really be a clearance, it is predicted, as another weather front moves in from the Atlantic on Friday.

A damp and patchy, cloudy outlook is expected to worsen into Saturday as a Scandinavian high pressure essentially blocks the Atlantic front over Ireland.

There is expected some clearance on Sunday, then more unstable weather, including a risk of hail and thunder.

Asked if shoppers and sports fans should reach for their wind-cheaters and raincoats on Saturday, Ms Walsh said: “And maybe their wellies.”