The problem with the Luas is everybody wants to get on 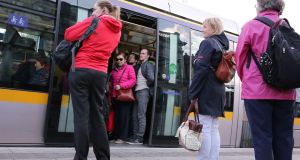 Passengers on the Luas Red Line. Overcrowding will not lead to the arrival of Tokyo-style ‘Oshiya’ pushing commuters into the carriages, says TII’s Paolo Carbone. Photograph: Nick Bradshaw

As trains arrive, they herd the waiting passengers into position before squeezing them into packed carriages. Folded through the doors, their charges are resigned to the realities of daily commuter life in the city, one of the busiest on the planet.

While it is unlikely such scenes will ever play out in Dublin, there is nevertheless a need to somehow get more people onto the Luas.

The increasingly popular mode of transport in the capital has seen peak time demand surge since the Cross City line opened last December.

“[The] increase in demand is obviously due to the buoyant economic activity which has led to a lot of development and a lot of people wanting to live in Dublin,” says Paolo Carbone, head of public transport capital programmes at Transport Infrastructure Ireland (TII).

The Luas Green Line in particular, running from the city centre south toward Brides Glen, has been experiencing a sharp rise in the numbers of daily passengers.

TII estimates that, at peak travelling times, about 12,000 passengers use the Green Line every hour – up from about 11,000 (or 5,500 passengers in either direction) a year ago.

Since the Luas trams first began running in 2004, the question of how to fit more people onboard has been puzzling operators. It became a victim of its own success.

Trams on the Red Line were eventually extended to meet demand. That is now the next step in the Green Line process – TII intends to begin stretching 26 trams by late next year, adding 12 metres to each, while an additional eight long trams (each measuring 55 metres) are due to arrive in late 2020.

Once complete, these measures will add about 2,000 hourly journeys to Green Line capacity.

“The extensions involve a bit of surgery. It involves taking one vehicle out of service, splitting it in two halves, adding two pieces in the middle, bringing it back together and then testing and commissioning it,” explains Carbone.

“This should cater for the Green Line comfortably, it’s difficult to say – somebody said that forecasts would be great if it weren’t for the future – realistically to the very early 2030s . . . but not more than that.”

The long game is, of course, upgrading a huge chunk of the Green Line – from Sandyford to Charlemont – to the Metro. This would introduce a service that, unlike the Luas, would be entirely separate from other road users and have faster, more efficient services carrying more people.

It will be an important development for a public transport service that, already extremely popular, will feel the increasing strain of urban development and population growth.

Luas extensions and longer trams can only go so far. Eventually, the so-called “tram jam” situation will arise – when operators simply cannot add any more services without having one tram piled up behind another.

Standing room-only carriages are not possible in Dublin – the low, narrow trams used in the capital mean their wheels must be encased underneath the seats. Passenger mobility and lengthening distances and journey times must also be considered.

Carbone believes the Metro, due by 2027, is essential. The idea of it not happening would only lead to the same retrospective recriminations that befell a decision not to link the original Luas lines, he says.

Dublin’s tram network is already one of the busiest in Europe, and among the more efficient. In peak times its trams run at a rate of about one every three minutes or less. In most other countries, it is closer to one every five minutes.

By comparison, Manchester has a network of about 100 kilometres carrying in the region of 45 to 47 million passengers per year. Dublin’s 47 kilometres will carry about 42 million this year.

The Cross City section, meanwhile, has had about the level of use as was anticipated, particularly for students and “leisure” trips into the city.

While it is not facing the same squeeze as the Green Line, Carbone says: “You need to bear in mind that you are building a system with a time horizon that is 30, 40 years [out]. It would be wrong if you were to see it crammed on day one.”

It wasn’t very accepted, I have to say, in the public domain when it was being built

And while that day will inevitably arrive, the Luas has shown its ability to shoulder much of the commuter needs of the capital. Its expansion, coupled with the Metro, will likely take on more in the years to come.

For Carbone, an Italian who arrived as a contractor to help build the original lines, it may provide an opportunity to see just how far the trams have come in terms of bedding their way into the city’s anatomy.

“It wasn’t very accepted, I have to say, in the public domain when it was being built,” he said. “In actual fact, the narrative was ‘ah, nobody’s going to use it’. And then it was such a success that one year into the operation it was necessary to extend the trams.”

As for crammed carriages on busy weekday mornings, he does not appear concerned. The Oshiya are not coming. Busy trams are a sign of progress, even if they are a little uncomfortable.

“Different people in different cities have different attitudes to getting into a crammed service,” Carbone reflects. “If you go to Bank station or Monument station on the Tube at peak time the level of crowding there is, on a very quiet day, as crowded as the Luas.”