Storm petrels: why we have no idea how many are left 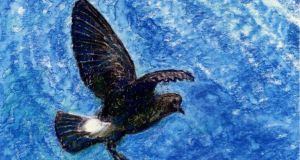 Camped alone on Inishvickillane a year or two before Charles Haughey bought that Co Kerry island, I pitched my tent in the lee of a dry stone wall. I knew enough about birds to realise that occasional churring noises coming from the depths of the stones must belong to nesting storm petrels. But, foolishly, it never occurred to me that I might get in their way.

Thus, around midnight, I was shocked awake as a succession of petrels returning from the sea with food struck the canvas over my head and slithered down it. Peering out, I found the night sky scissored with little black wings like those of bats. It also was echoing with weird, cackling, screeching calls – not from the petrels but from Manx shearwaters, their much bigger cousins, also flying in to their burrows. It was an awesome and disquieting experience.

Among the great hosts of seabirds that breed in summer around Ireland’s coasts and on the islands, those coming and going by night to avoid their predators, nesting deep in burrows and stone crevices, present a special challenge to the ecologists who want to count and conserve them.

Manx shearwaters have been returning in the hundreds of thousands from wintering in the south Atlantic. The storm petrels, too, come back from seas off west Africa. They return to the same burrows or crevices and lay a single egg in May. The shearwaters can travel up to 3,500km to find a single meal for their chicks, and even the tiny petrels, weighing only 25g, will fly 400km off shore for food.The remoter, undisturbed islands off the UK and Ireland host the great bulk of their global breeding populations, with Ireland sheltering at least 10 per cent.

Along with the burrow-nesting puffins, they are suspected to be in decline, but Ireland has little reliable knowledge of numbers and no monitoring of trends. The first national census attempt was in Seabird 2000, carried out in Ireland by the National Parks and Wildlife Service (NPWS) and volunteers from BirdWatch Ireland. Its main method was tape-playback – the playing of the recorded call of each species at the entrance to a burrow, or at rock crevices, then listening for a response from within.

Such surveys were carried out on 180 islands off the UK and Ireland, many of them hard to land on. They did not include, however, for logistical and budgetary reasons, many Irish islands that might have held the birds. Many of them, too – puffins in particular – were nesting on dangerously steep slopes and inaccessible clifftops.

New work by a research group at University College Cork, led by ecologist John Quinn, now shows that many of the population figures were probably vast underestimates. In research surveys for his PhD, Gavin Arneill and fieldwork teams made intensive study, with repeated visits, to widely separated islands round the coast, from the Saltees off Co Wexford to Inishmurray off Co Sligo.

One was High island, off north Connemara, which is currently offered for sale but is part of a Special Protection Area for birds. The Seabird 2000 estimate for storm petrels on the island was 60, but Arneill’s team found almost 4,000 pairs, most nesting not just in the usual burrows, crevices and boulder beaches but in the island’s stretches of tussocky grass. They also found 818 Manx shearwaters, compared with Seabird’s 22. Other islands showed similar patterns.

Arneill’s thesis is complex and ambitious, aiming to refine and standardise fieldwork and cut down its time and cost. To predict densities of birds, he uses maps and aerial photographs to model everything in their habitats from the angle of slopes to the flowering plants that species prefer (sea pinks, bluebells and sea campion). In this highly digitised process, stonewalls and ruins can become, duly, “binary covariants”.

In a manual of census methods he has drafted for the NPWS the use of tape playbacks still has its role in detecting breeding birds “and to get a crude feel” for their distribution. One plays the call at 80 decibels (which is loud) for 10 seconds and listens for 30 seconds, then moves on to the next hole.

All this is very laborious, and repetition for monitoring is costly. Automated methods are in development and Arneill tried passive acoustic monitoring of Manx shearwaters on High island. At the peak of two seasons, recorders on sticks were listening from midnight to 4am.

Their 850 hours were analysed on computer by “the Song Scope recogniser”, which identified 24,502 calls. But the “soundscape” these produced was too confused by calls from non-breeding birds on flight paths within the colony and told too little about the numbers of nesting birds.

Man died from sepsis after hip replacement surgery, inquest finds 06:47
New device to detect cars being driven without insurance issued 06:37
Election 2020 fact check: Do banks in Ireland pay no tax? 06:00
‘Considerable disruption’ to trade looms even with post-Brexit accord 02:50
Coronavirus: Chinese citizens in ‘self-isolation’ after returning to Ireland 02:46