Cost of housing is pushing people towards ‘pauperisation’ 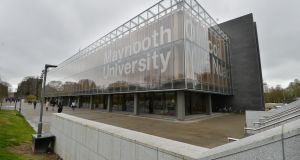 The cost of housing is pushing increasing numbers of people towards “pauperisation” and forcing them to cut back on education and food, a conference on public housing has been told.

Dr Daithi Downey, who is head of housing policy and research with Dublin City Council, said that the “declining affordability of housing… is not without significant effect” and that people are “getting poorer or spending less on other things” like food and education due to the cost of housing, especially in major urban centres.

Meanwhile, renters are facing insecure tenure, and in some instances, an “increasingly precarious working environment” in their employment due to zero hours contracts, he said.

Dr Downey was speaking at a seminar on new visions and practices for public housing held a NUI Maynooth on Wednesday. The seminar was also told that contrary to assurances from the Taoiseach, there is currently a housing bubble in Ireland.

Professor PJ Drudy, who is economics professor emeritus in Trinity College Dublin, said that Ireland is currently experiencing a housing bubble. “There is a housing bubble, despite what the Taoiseach has said six months ago,” he said.

“Housing is over-valued, or, if you like, more accurately, over priced.” He called for the government to discontinue the help to buy scheme, which can be worth up to €20,000 to first time buyers, which he said was inflationary. “I would argue it’s simply pushing up the price of new housing.”

He also criticised the development sector, saying builders “are drip feeding houses onto the market… to maintain high prices”. He said state subsidies to the rental sector, which involve payments to private landlords were “insane”.

The conference heard that a “cost rental” model of public housing would help drive improvements in housing affordability. Cost rental is defined as housing where the rent is determined by the cost of providing and maintaining the housing, as opposed to a wider market rent.

John O’Connor, the chief executive of the Housing Agency, called for a major expansion of the cost rental model, said that Ireland need a “rental sector that is at much lower cost and is secure”.

Mr O’Connor said that the maximum rent for a household on a median income of €32,030 could afford to pay was around €801 per month, while someone on a moderate income of €38,436 should pay around €961 per month. He argued that the cost of building apartments should be kept “down as much as possible so we can keep the rent down as much as possible”.

He said that in Ireland there was a “huge focus on home ownership and the idea of providing cost rental hasn’t got major buy in, both by people and also by the political system”. At the moment, Mr O’Connor said the focus must be on “how can we make our rental cheaper and more secure, because in a lot of parts of the country there is a huge problem in terms of the level of rent that people have to pay”.

He said that the state should focus on providing sites, infrastructure and long term low cost finance to public housing projects, pointing to the experience in Vienna, where of 19,000 new units provided every year, 13,000 are provided on a cost rental level.

Dr Mary Murphy, a senior lecturer in the department of sociology in NUIM, said that local government had to be strengthened if Ireland stood any chance of delivering sustainable public housing. “Other countries have the institutional capacity to deliver… we do not have that, we don’t even seem to want that,” she said, adding that local government has been “battered” in recent years.