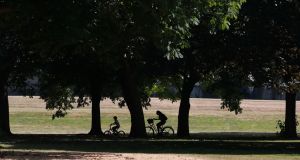 A redesign of the scheme plus the construction of a link through Fairview Park, and the requirement to fit in with the BusConnects corridor from Clongriffin to the city centre, has resulted in the inflated cost. Photograph: Nick Bradshaw

The cost of installing a new 2.7km “Dutch style” cycle path from Fairview to Amiens Street in Dublin’s north inner city has almost tripled to €20 million, according to Dublin City Council documents.

Councillors in October 2017 approved plans for the segregated cycle route which will connect the city centre with the Dublin Bay cycle path that runs along the coast from Clontarf to Sutton.

The route, which would start at the Alfie Byrne Road north of Fairview Park and continue on each side of the road past the Talbot Street junction on Amiens Street, had at that time, been expected to cost €7 million. However, documents issued by the council this week for the construction of the route have set the cost of the project at €20 million.

A redesign of the scheme since it was approved by councillors, the construction of a link through Fairview Park, and the requirement to fit in with the BusConnects core bus corridor route from Clongriffin to the city centre, has resulted in the inflated cost.

The cycle route was first proposed six years ago as a two-way track running on the east side of the road only. However, in 2015, the council’s traffic department said this would not be feasible and instead, it drew up plans for paths on both sides of the road.

The new plans published two years ago, involved the felling of 50 trees in Fairview Park, some of which are more than 100 years old. More than 15,000 people signed an online petition seeking the retention of the trees, some of which were planted in 1908 by nationalist and unionist communities as part of international Arbour Day celebrations.

The council subsequently amended its plans to save 42 of the trees, this required the removal of part of the inbound traffic lane running in front of Fairview Park.

On approving the scheme councillors ordered further design work be undertaken to achieve better segregation between cyclists, buses, and general traffic, and improved safety for pedestrians.

To accommodate the enhanced bus corridors, each bus stop will have a “passenger island” with a segregated lane for cyclists to travel behind the stop. Road junctions will be designed in the Dutch style where cyclists and pedestrians are separated from and given priority from traffic.

The cycle paths will be two-metres wide and protected by kerbs, and in some places separated from the roadway by trees or parked cars. The project will include the development of a link through Fairview Park along the river Tolka, between North Strand Road and Alfie Byrne Road.

The work, which will include the upgrade and reconfiguration of signalised junctions, the installation of toucan crossings, CCTV and lighting, landscaping and utility diversion works, is due to start this year and take two years to complete.