Route to be single lane for 2.5km as part of Sutton to Sandycove cycle project

Dun Laoghaire saw a 100% increase of cyclists in the month of May compared to figures last year and the council responded by delivering a new four kilometre cycle lane from Sandycove to Blackrock. Video: Enda O'Dowd 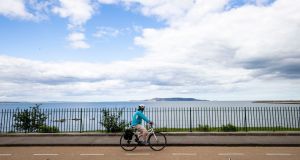 A one-way car ban is to be implemented on Strand Road, the scenic coast road in Sandymount, to accommodate a two-way cycle track along Dublin Bay.

In the latest in series of measures to requisition road space for cyclists, Dublin City Council is to turn the Dublin 4 road into a one-way street for more than 2.5km, from Sean Moore Road to the Merrion Gates.

The move follows the recent installation of segregated cycle paths in the city, including on the Liffey Quays, and the creation of one-way traffic systems by Dun Laoghaire Rathdown County Council to facilitate a cycle path from Blackrock to Sandycove, as part of Coronavirus mobility measures.

It will also bring the ambition of having a continuous Dublin Bay cycle path from Sutton to Sandycove, the S2S project, one step closer.

City Council chief executive Owen Keegan said traffic would be reduced to one lane on Strand Road, but the direction of the one-way system had yet to be determined.

“The preference might be for it to be one way heading out of town, but that might not be feasible for the full length. What we might do is have a series of one-way sections in either direction,” he said.

“There is a bus service on part of it that has to be taken into account. We will work it out in the detailed designs to make sure that what we choose makes sense.”

Mr Keegan said it was not considered feasible to reallocate part of the footpath or the park along Sandymount Strand for the cycleway instead of taking away a traffic lane.

“There are parts of the footpath that aren’t wide enough and the park is part of the designated protected area, so from a planning point of view it would be very complicated to intrude on that.”

The reallocation of the road space would be implemented under temporary Covid-19 mobility measures, so would not involve going through the planning process.

Preliminary designs will be circulated to councillors in the south-east area over the next two weeks together with an outline plan for its implementation. Mr Keegan said he intends to have the path in place “very quickly” afterwards.

Residents on Strand Road or in Sandymount have not been consulted about the plan, but Mr Keegan said he hopes it will be a popular measure.

“Reducing vehicular traffic is a measure I would hope might be seen as beneficial,” he said “I expect significant support for it in the south-east area.”