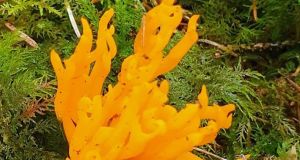 The yellow staghorn fungus is generally regarded as inedible.

This fungus was poking out of the forest floor like little fires in Saggart Woods. Is it edible? – Conal Brennan, Brittas, Co Dublin

It’s yellow staghorn, generally regarded as inedible because of its gelatinous texture.

I saw this interesting thing on a tree in Phoenix Park; what is it? – Fred Clarke (7), Montpelier, Dublin 7

That growth looks like crown gall which can grow very large. It’s caused by bacteria in the soil.

We came across this big guy on the Bull Wall in Clontarf. It was about an inch long. What is it? – Saorlaith McLoughlin, Clontarf, Dublin 3

It’s a sea slater that lives on the sea shore.

We found this curious carcass at Renvyle Point, Co Galway last month. It was rather decayed but the teeth were intriguing. – Margaret Watchorn, Blackrock, Co Dublin

From counting the number of teeth, it’s most likely a common dolphin.

I spotted this bird on the east pier in Dún Laoghaire harbour. It’s the first time I’ve seen it and it looks like a penguin. It also went under the water and disappeared. What is it and where do they live? – Nanci Martin, Sandyford, Dublin18

It’s a guillemot. They breed on coastal cliffs in summer and winter in harbours and bays.

I saw this caterpillar on the shore. What are the white bits on it? Are they bits of fluff from a nearby plant? – Robert Maxwell, Kinsale, Co Cork

That’s the caterpillar of the fox moth. The white bits are the larvae of a parasitic insect, probably those of an ichneumon wasp, that preys on the caterpillars of moths.

My partner, Fergal Rodgers, took a fascinating image of this stunning creature in our back garden. What is it? – Wendy O’Brien, Blackrock, Co Dublin

This is an ichneumon wasp which does not sting like the common wasp. It is a parasite on the caterpillars of moths.

Ethna Viney welcomes observations and photographs at Thallabawn, Louisburgh, Co Mayo, F28 F978 or by email at viney@anu.ie. Please include a postal address.