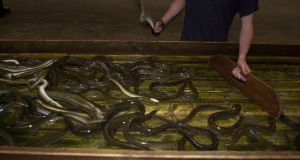 ‘He stood at night,” wrote Seamus Heaney, “when eels/ Moved through the grass like hatched fears/ Towards the water. To stand/ In one place as the field flowed/ Past, a jellied road ...”

Heaney’s young fisherman, standing in fields around Lough Neagh, had a rather spooky time. In Dublin’s Blackrock Park, however, as told to Eye on Nature, a reader taking her dog for an early morning walk was just perplexed to see “hundreds and hundreds” of eels bunched together at the rim of the lake and wriggling out through the grass towards the sea.

Even eels in Ireland’s suburban park ponds, grown to sufficient maturity, are drawn into the mass migration of their species, swimming off to spawn in the Sargasso Sea, some 6,000km away.

Living on Connacht’s stormy coast, I have imagined the eels alerted by microseisms, the barometric tremors travelling ahead of low pressure. Their omen of heavy rain reaches up into lakes and streamlets to the eels waiting on their journey, their bellies silvered, their systems ready-proofed against salt.

Once seaborne, they do not, it seems, take the straight bearings their purpose might dictate. Satellite tagging of hundreds of European eels, including some leaving from Ireland, showed them meandering and pausing, even doubling back, along the way.

This adds yet more mystery to the timing of the Sargasso spawning season and its yield of larvae, returning as millions of tiny “glass eels”, transparent elvers, to the freshwaters of Europe and North America.

The dislocation of this life cycle over the past 30 years, linked perhaps to climate change and its impact on the Gulf Stream, has been showing some recovery. But the dramatic decline in eel return before 2007 has brought lockdown conservation measures and made glass eels the most trafficked wild creatures in the world.

In March this year, a UK seafood salesman was found guilty of smuggling some five million glass eels worth more than £53 million (€59m) to Hong Kong between 2015 and 2017.

Their huge illegal traffic from Europe to Asia was estimated by Europol in 2018 at 100 tonnes a year, or some 350 million fish. The UK-based Sustainable Eel Group computes that the final eel fillets produced from them are worth €2.27 billion at the point of consumption.

While eels come and go through every estuary in Ireland, those of the Shannon and the Bann have been especially important for commercial fishery.

The big co-operative fishery at Northern Ireland’s Lough Neagh, trapping silver eels mainly for export to the Netherlands, has replenished the lake’s stock by flying in annual millions of glass eels from France and mainland Britain. Just as these are maturing into saleable eels, the lake’s fishermen fear that Brexit will lose the Dutch market and end the EU’s permission for the import of glass eels.

The Republic has no comparable fishery and the major obstacle to eel migration through the Shannon is the Ardnacrusha power station. This has made the ESB responsible for trapping, transporting and monitoring the eels to aid their passage to and from the sea.

The continuing loss of eels in hydroelectric turbines has long been an EU concern. In 2007, the EU set out a recovery framework in which 40 per cent of Europe’s silver eels must be allowed to escape to the sea – a target still largely unfulfilled.

Ireland’s national eel management plan brought a ban on eel fishing in 2009 that deprived some 200 licensed fishermen of their livelihood. Their hardship has been relieved by compensatory payments from an “eel fisherpersons support scheme” backed by EU funding.

As further encouragement, the local knowledge and eel expertise of the fishermen was recruited by Inland Fisheries Ireland (IFI) in a programme of catch-and-release sampling for research and stock assessment.

A pilot survey of glass eels in the Shannon estuary gave the first indication of a sustained recovery. In 2014, Dr Will O’Connor of the European Eel Foundation described a “massive run” of millions in early April.

Since then, the IFI teams have monitored glass eel runs in rivers such as the Boyne, Fane and Moy, yellow eel populations in lakes across the country, and the volume of silver eels escaping from rivers such as the Boyne, Barrow and Blackwater. In the latter operations, the IFI was offering €400 a night for at least 20 nights for two tax-compliant, well-insured fisherpersons.

For the summer lake surveys of yellow eels, the IFI has supplied chains of fyke nets, long funnels of netting, baited and staked out in the water as the equivalent of lobster pots. Last May, however, brought science news that could supplant this traditional technology.

Eels, like other aquatic organisms, shed traces of distinctive DNA into the water. In a co-operative study with a team from the University of West England, DNA data from sampling of five Irish lakes compared well to estimates from the fyke-net catches of eels. Indeed, the shore-based, “non-invasive” DNA methods may give a better picture of lakes with low eel populations.