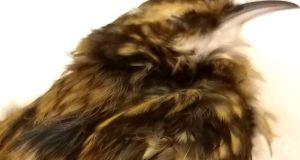 A treecreeper found in Limerick

I found this little bird; is it a treecreeper? Unfortunately it did not survive. – Anita Mahon, Limerick
Yes, it is.

My neighbour and I have separately spotted in our road what we believe to be a white pheasant. Is this unusual in the Galway region? – Alison Eadie, Moycullen, Co Galway
White pheasants are seen occasionally in different parts of the country. There have been reports from Galway in the past. It has been said that albino or leucistic pheasants are the result of inbreeding in flocks reared for shooting.

We met this frog near my neighbour’s Gortbrack organic farm outside Tralee. It hid itself under its hands when we came near. – Niamh Ní Dhúill, Trálí, Co Chiarraí

The Lyreen river was a bit high for a pair of handsome, white-breasted dippers I spotted. – Damien Maguite, Maynooth, Co Kildare
No doubt a breeding pair.

This single globule of frogspawn was suspended on a grass stalk in Portlaw Woods, Co Waterford. There was a dead frog nearby and many more frogs around the woods, as well as copious amounts of spawn, some in unpromising locations. – Aidan Finnegan, Waterford.

I regularly travel the road between Ballymena and Cushendall, Co Antrim. Recently I encountered three dead badgers in separate incidents. I’ve never seen even one before. Is there something about this time of year that causes them to be killed on the roads? – Brian Scott, Ballymena, Co Antrim
It’s the breeding season and they are out seeking mates.

This bird has been sleeping in our clothesline pole since the start of autumn. Sometimes it has a friend that stays in the opposite pole. Is it a great tit? – Anne Skelton, Barna, Co Galway
It is indeed.