Ethna Viney on a parasitic wasp, territorial robins and unusual sightings in January 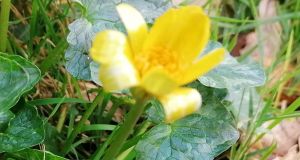 I found this little wasp-like insect sitting on my chainsaw while I was chopping wood. – Mike Hodder, Fountainstown, Co Cork
It’s an ichneumon parasitic wasp, specifically ichneumon xanthorius, which is a predator of moth and butterfly caterpillars. There are other similar ichneumons.

found these guys curled up dead in my sunroom. They were about 4cm long. – Erica Murray, Dalkey, Co Dublin
They are white-legged snake millipedes, also called black millipedes. They normally live in leaf litter and feed on detritus and surface algae.

I found this lobster tag issued by the Florida Department of Environmental Protection in 1997-1998. It travelled all the way from Summerland Key, Florida, to Spiddal, Co Galway, a distance of 4,138 miles over a period of 23 years. – Siobhán Curran, Spiddal, Co Galway

Is it unusual to have two pairs of robins visiting my garden? – Ciaran Casey, Foxford, Co Mayo

It depends on the size of the garden. A pair of robins will have a defined territory, which they will defend against interlopers. If you have two pairs there must be room in your garden or the surrounding area for two territories.

Jim O’Brien wrote to say that a stork landed in the garden of his sister in Kenmare, Co Kerry, on January 27th. The stork was also seen and confirmed by a neighbour. A black stork was previously seen in Ireland in 2012 flying in Westmeath and later in Clare, from where it flew to Kerry.

Despite the cold snap this month, spring came in January in many parts of the country. Tara Robinson reported honeybees, celandines, catkins in flower and hawthorn leaves in Kerry. Pascal Desmond had dandelion flowers and seeds in Wexford. Mike Egan had bees on crocuses in Meath, and John Miller saw bumblebees in Bushy Park.