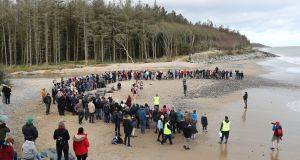 A gathering of 400 watching the release of four grey seal pups back into the sea following their rehabilitation at Seal Rescue Ireland. Photograph: Nick Bradshaw

There’s a light breeze and intermittent sunshine on the beach north of Courtown Harbour in Co Wexford. About 400 people have gathered to witness the release of four grey seal pups back into the wild following their rehabilitation at Seal Rescue Ireland.

Adults and children alike are genuinely excited to see the four seal pups – whose recovery many have observed on videos and photographs – manoeuvre their way along the beach into the water. After flopping along the sand, the seals immediately become agile swimmers, staying close to the shore for a few minutes – as if to acknowledge the crowds – and then bobbing up and down across the waves out to sea.

It’s a gentle yet captivating encounter with these wild animals, and people are keen to explain what brought them here from various parts of Ireland.

“I came because I adopted Pine [one of the seal pups released] for my five cousins at Christmas time,” says Dublin-based Fabio Valle.

Grace Hughes (9) from Dublin adopted Pine too, opting to spend her Christmas money “saving a seal” rather than buying a toy.

Local Wexford children drop into the Seal Rescue Ireland centre behind the Leisure Centre at Courtown Harbour regularly to see the injured seals, and then join the celebrations when they are released into the Irish Sea weeks or months later. Parents with children in buggies and by the hand are joined by teenagers and older people.

Claire Bealin from Co Kildare says that it was very sad to see from videos and photos how Pine had got caught up in discarded fishing net off the Waterford coast. “He still has a scar on his neck. I adopted him for my mum at Christmas.

“It gladdens your heart to see so many people here. We watched the videos of the tiny seal being fed intravenously and gradually getting healthier, and now we’re here to see him being released back into the sea today,” says Siobhán Russell, Claire’s mum.

“We love wildlife and conservation. When children see how the seal pups can get injured by eating plastic it helps them see the reason behind not throwing plastic away and keeping beaches clean,” says Bealin.

The Kildare family has also adopted another seal, and will return to Wexford for its release.

Melanie Croce, executive director of Seal Rescue Ireland, explains how the centre takes in up to 150 seals during a year, and has about 40 at any one time.

“The public report a seal in distress, and our animal care team will assess the information based on photographs and descriptions. Then we’ll contact some of our 100 rescue network volunteers who are trained in how to safely lift and transport the seal here.”

Ann and Isabelle Wood from Co Wicklow are often called on to rescue and transport a seal to the centre.

“It’s so rewarding helping the seals because most of the time they are injured because of humans,” says Isabelle Wood, who is studying animal care.

Her mother, Ann Wood, adds: “I’ve always loved seals since my Dad used to fish on the beach. I’m fascinated with seals and their fascination with us.”

The 25 staff and international interns at Seal Rescue Ireland bring a dynamic energy to their work. The Seal Rescue Ireland centre has an intensive care unit for tube-feeding, individual kennels with baths and heated mats for recuperating seals, and four pools when they recover their strength and learn social skills.

“We bring in the pups that fail to flourish. This can be because they have ingested plastic, become entangled in fishing nets or become ill due to a disease,” says Croce. Seal pups can also drown or become injured in storms.

Although the population of grey seals around Ireland is currently healthy, having recovered from very low numbers in the early 19th century due to seal hunting, Croce argues that it is important to keep them well, not least because they are a bio-indicator species – which means their presence indicates clean waters.

“There are fewer grey seals in the world than African elephants, and just because they are not on the verge of extinction doesn’t mean we shouldn’t try to protect them.”

Doctors of the sea

Seals are often berated by fishermen for eating their fish. Croce argues that they “are the wolves of Irish waters and the doctors of the sea”.

“They are opportunistic feeders which mean they eat the weakest fish, leaving the stronger fish to reproduce and evolve. They also recycle nutrients through their waste, which feeds phytoplankton – the basic of the food chain.”

The highest incidence of seals in the bycatch [unwanted fish] happens in Irish seas, according to Croce.

Seal Rescue Ireland is currently treating an ill Arctic Ringed seal, the first reported arrival of this species in Ireland. The seal (which has been called Cloudberry) was rescued off the Co Mayo coast in January 2020. It may have to be shipped to Iceland or Denmark for release when it has recovered.

THE ATLANTIC GREY SEAL AND THE COMMON OR HARBOUR SEAL

The Atlantic grey seal and the common or harbour seal are the two types of seals found in Irish waters. Grey seals are much larger and more common than harbour seals.

Grey seals are mainly found on the west coast, but with significant numbers on the east and southeast coasts too. Male grey seals (bulls) weigh up to 300kg. Females (cows), which give birth to one seal pup each year, weigh about 180kg.

Their fur is grey-brown with blotches of lighter or darker colours. They breed between September and December.

The pups are born with a white coat, which they shed at about six weeks before they enter the water for the first time. The adult grey seals spend hours resting along rocky shoreline on so-called haul-out sites.

Common seals, which weight up to 130kg, breed in May/June in isolated but sheltered estuaries or mudflats along the western seaboard. The distinguishing features between the two types of seals – apart from size – are that grey seals have parallel nostrils and a large dog-like snout while common seals have V-shaped nostrils and a shorter snout.

Grey seals come ashore in February and March to moult. This is a good time to observe grey seal colonies, but people are strongly advised not to go close to them as they can attack if they feel they are under threat. Dogs should also be kept on leads as seals/dogs can bite each other.

“Seals are sociable, curious and intelligent. Closely related to dogs, they will go towards you which can get them into trouble,” says Croce of Seal Rescue Ireland.

Seals also abandon their young if threatened or disturbed by humans, and up to 50 per cent of grey seal pups don’t survive.

Common and grey seals are protected species under Irish and European law. There are approximately 10,000 grey seals around Ireland, and 2,000 common seals. Lambay Island in north Co Dublin; Inishbofin, Co Galway; Inishshark, Co Galway; the Saltee Islands, Co Wexford; and the Blasket Islands off Co Kerry are special areas of conservation for grey seals in Ireland.

1 Coronavirus: Ten more deaths confirmed in Republic
2 People should carry ‘evidence’ of travel reasons if exceeding 2km limit
3 Trump boasts of coronavirus ‘ratings’ as top expert warns of up to 200,000 US deaths
4 Coronavirus: Husband unable to say farewell to wife of 51 years
5 Maureen Dowd: Coronavirus has made a national shrink of Andrew Cuomo
Real news has value SUBSCRIBE