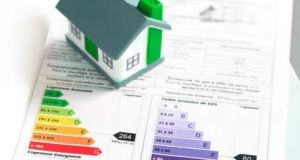 Income tax credits for people who retrofit their homes to make them more energy efficient are proposed in a new plan from senior Government officials. Photograph: Getty Images

Income tax credits for people who retrofit their homes, rental properties and second homes to make them more energy efficient are proposed in a new plan from senior Government officials.

New papers also suggest that the Government should increase carbon tax by €10 per tonne from its current level of €20 per tonne in the October budget.

The Department of Finance has designed a new scheme that would allow such homeowners reduce their income tax bills by 13.5 per cent of the total amount of money they spend on energy-efficient renovations.

The proposal follows on from an instruction contained in the Government’s recent Action Plan to Tackle Climate Breakdown asking for new “climate-related fiscal measures”.

One of the key planks of that plan is to significantly accelerate the retrofitting of homes, and the Department of Finance tax strategy papers, expected to be published in the coming days, outline how this could be one.

The papers, drafted by senior officials to lay out options for Minister for Finance Paschal Donohoe’s next budget, propose an income tax credit that could be claimed alongside existing grant schemes.

The documents argue that, given the target of 500,000 retrofits by 2030, “accelerated levels of retrofit activity need to be incentivised and... a dual direct grant/tax incentive approach may be justified in such circumstances”.

The tax incentive scheme would allow homeowners claim a tax credit worth 13.5 per cent of the total amount they spent on works to their property for two years after the renovations have been paid for. It would be targeted at homes with a BER B3 rating and those with less heat-efficiency ratings.

The work to the home that would qualify for the scheme would be wall, attic or floor insulation, upgrades to windows and doors,ventilation systems, the installation of wood-burning stoves and new renewable energy sources such as heat pumps and solar panels.

The tax strategy papers from the Department of Finance also question the intended move of laying down a firm annual trajectory that would see carbon tax increase to €80 per tonne, from its current rate of €20 per tonne, by 2030. In order to reach this target the papers propose a €10 per tonne increase in the October budget and a €5 increase every year thereafter.

They say the government of the day may be restricted in responding to incidents such as an oil crisis or economic shocks.

“There are other considerations related to locking into a long-term trajectory of carbon tax increases,” the papers say. “Such a move reduces the flexibility of the Minister to react to specific circumstances which may have serious implications for the economy, for example Brexit.

“Setting a long-term carbon tax trajectory that is wholly insensitive to developments in crude oil markets (or more relevantly price developments at the retail end) may imprudently limit the flexibility of the Minister for Finance to appropriately react to the circumstances of the day.

“This suggests that if there is to be a long-term trajectory in place it should be flexible enough to allow for both a ‘step off’ from the carbon tax escalator or, in the alternative, an ability to increase the speed towards €80 per tonne.”

The papers also outline how the vehicle registration and motor tax systems can be reformed to encourage the take-up of electric vehicles, but caution that a collapse in revenue for the exchequer from decreased tax receipts because of greater numbers of low-emission cars must be offset by new taxes.

This could include taxing motorists on the distance they drive rather than paying excise on fuel at petrol station pumps.

The papers also set out a five-year roadmap to equalise the excise on diesel and petrol.