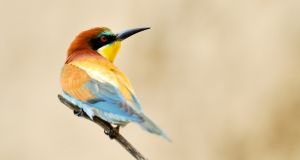 The European bee-eater bred in the UK in 2014 and 2017. Photograph: Getty Images

At least 55 land-based and marine animals have moved to parts of the United Kingdom outside their natural range or arrived in the UK in the 10 years between 2008 and 2018, a study from the Zoological Society of London has found.

They include purple herons, which have bred successfully for the first time in Kent in 2010, and European bee-eaters which bred in the UK in 2014 and 2017.

Social media helped scientists to reveal dozens of animals, from birds to bats, are on the move in the UK or are new arrivals as a result of climate change.

Jersey tiger moths have spread from the Channel Islands and south coast to London, while red mullet and greater horseshoe bats have also been displaced by climate change.

The black bee fly was the only species identified as having entered the UK for the first time and become established since 2008, with the first record in Cambridgeshire in 2016 when it was found on a bug-hotel in a garden.

The study analysed UK government environment reports and 111 scientific papers to find species that were on the move as a result of rising temperatures.

Researchers also performed Twitter and Google searches for terms including “unusual species” and “first sighting” for the countries of the UK to find where people had posted images online of the animals in unusual places.

About 10 of the 55 species were identified thanks to social media, the research published in the Journal of Applied Ecology shows.

The research, which focused only on species that had established sustainable new populations through natural movement, said of the 55 species identified, 16 (29 per cent) are known to have negative impacts on nature or people.

They include crop pests such as the box tree moth and oak borer beetle.

A further 11 species (20 per cent) were reported to have potentially positive impacts, such as increasing tourism or boosting fish stocks.

Dr Nathalie Pettorelli, lead author and senior research fellow at ZSL’s Institute of Zoology, said: “We are currently massively unprepared for the climate-driven movement of species that is happening right now in the UK.

“As it stands, society is not ready for the redistribution of species, as current policies and agreements are not designed for these novel species and ecological communities — particularly if those species have no perceived value to society.

“Our results suggest that many species are on the move in the UK, and that we can expect a lot of changes in the type of nature we will have around us in the coming years.

“But the lack of an integrated national platform dedicated to tracking and communicating about species displaced by climate change is currently a hindrance to mitigating those potential ecological, economic and societal associated impacts.”