Changes by councillors to allow developments on Valentia and Cahersiveen criticised 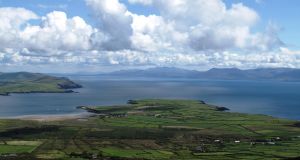 Independent councillor Johnny Healy-Rae, who proposed the amendments, warned earlier this year the region risked being turned into ‘a national park’

The planning regulator has criticised changes made by councillors in Kerry to a local area plan which would allow the construction of housing in a highly scenic location.

The Office of the Planning Regulator has called on Kerry County Council to omit material alterations to the two sites – on Valentia Island and outside Cahersiveen – proposed by councillors against the advice of planning officials.

The regulator said what amounted to “significant rezonings” contained in the draft West Iveragh Local Area Plan 2019-2025 were not consistent with the core strategy of the Kerry County Development Plan 2015-2021 and would be in breach of the Planning and Development Act 2000.

The main objectives of the draft plan are aimed at preserving the landscape of West Iveragh and pursuing Unesco world heritage status for its transatlantic cable heritage on Valentia Island. In addition, it seeks to leverage the economic benefits through astrotourism of the gold tier status of the Kerry International Dark Sky Reserve which covers 700sq km, including most of the West Iveragh area.

The plan also seeks to place a clampdown on rural housing except within the boundaries of key towns and villages.

However, councillors voted in May in favour of amending the draft plan to rezone about nine hectares of land at Farranreagh, west of the village of Knightstown on Valentia Island, for housing.

The regulator said Knightstown had not been identified as a growth settlement under the Kerry County Development Plan.

The OPR also criticised a separate proposed amendment to extend the settlement boundary of Cahersiveen for housing to include two parcels of lands amounting to 6.6 hectares on the northern side of the town.

“Development of these spatially detached lands would represent piecemeal and unco-ordinated development of the town into the surrounding countryside and erode the established boundary of the town along the southern side of the inlet,” the OPR added.

Independent councillor Johnny Healy-Rae, who proposed the amendments, warned earlier this year the region risked being turned into “a national park” due to the ban on holiday home development between Cahersiveen and Waterville.

On Wednesday, he expressed disappointment at the view taken by the regulator “at a time when the market will dictate what will be built”.

Mr Healy-Rae said the lands outside Cahersiveen were suitable for small housing developments.

“They are not in the middle of nowhere. It makes no sense to leave them undeveloped when there is a shortage of housing in the area,” he added.

Mr Healy-Rae pointed out that the lands on Valentia Island, which are owned by Mick O’Connell, the veteran Kerry footballer, and a neighbour had been zoned for housing under the two previous local area plans.

“I believe they are entitled to keep that zoning as it’s so hard to get it,” he said.

Mr O’Connell said he could find no evidence why planners had again suggested a change to zone their land for agricultural use.

He claimed it would “leave an irregular and effectively inaccessible plot of ground that was no longer suitable for farming surrounded by residential houses.”

In a submission to the council Mr O’Connell said: “These lands were owned and worked by our families and used for generations. As islanders and seamen we are of the soil there and have a very special affinity with them.”

He claimed their motivation was “to safeguard a visually sensitive area” from inappropriate development.

Under legislation the council’s chief executive is obliged to provide an explanation to the OPR if it does not accept the regulator’s recommendations.

The OPR can make recommendations to the Minister for Housing, Planning and Local Government, Eoghan Murphy, to direct the local authority to make changes to its development plans.