Ramping up supply would not address root problem of leaking pipes, analysis argues 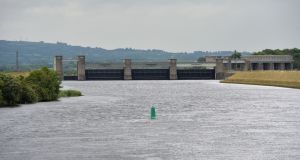 Irish Water’s justification for its proposal to pipe vast quantities of water from the river Shannon to the Dublin region to solve its acute supply problems has been challenged in new analysis.

What is known as the Water Supply Project – Eastern and Midlands Region has been officially costed at between €1.2 billion and €1.3 billion.

In a detailed file sent this week to the Oireachtas Committee on Housing, Planning and Local Government, consultant Emma Kennedy outlines how Irish Water made misleading and questionable statements about high levels of water leakage in Dublin and about the Shannon mega-pipeline when it appeared before it last year.

Earlier this month, Ms Kennedy, whose company Kennedy Analysis has evaluated all aspects of the project, outlined her concerns at a meeting with the office of the Commissioner for the Regulation of Utilities, which has been asked by the Government to carry out an independent review.

In previous evaluations of the project, Ms Kennedy concluded it could not be justified as it would pump more water into Dublin’s supply system “without addressing its crippled pipes” and was based on an incorrect estimate of demand.

She criticised the way alternatives to the Shannon option had been evaluated; claimed a groundwater study was flawed and noted that “new raw water reservoirs were not among then 10 options outlined”.

Switching from a precarious reliance on the Liffey to supply water in the Dublin region to using the Shannon as its main source of water goes against expert advice, which advocates having a diversity of sources, she concluded.

To support this view, she outlined the case of Paris where the key strength of its water supply is the diversity of its sources, with equal amounts coming from underground and river sources.

This, she said, “enables efficient management of unexpected incidents like accidental pollution or pipe damage”.

The latest Kennedy Analysis report concludes Irish Water misled the Oireachtas committee on the scale of improvements being achieved in other major cities through targeted investment to address leakage.

Independent analysis by academics in Dublin City University backs her findings on leakage and demand.

In April 2018, Irish Water told the committee that a target of 20 per cent leakage “is not achieved in any water utility in any part of Britain”.

However, in a dossier sent to the committee, Ms Kennedy notes data in Irish Water’s own report showed that of the 22 water suppliers in England and Wales, 13 had leakage of 20 per cent or below.

While Irish Water told the committee it took “14 years of sustained investment” to get London’s leakage rate down from 946 million litres to 760 million litres, Ms Kennedy notes that the independent review of Thames Water’s mains replacement programme shows leakage was cut from 946 to 713 million litres in just four years.

“Ireland’s pipes are in such disrepair that it has among the worst leakage in western Europe. Over half of its treated water is lost between the reservoir and the tap,” she told The Irish Times.

“If Irish Water did nothing more than meet its own leakage targets in the coming years, the volume of ‘new’ water available at the tap would more than offset the growth in demand from Dublin’s growing population.”

While the capital’s water issues are acute, they are, in her view, down to infrastructure rather than a lack of water.

The project, she believed, had striking similarities with the infamous Kielder supply scheme in northeast England in 1981, which was considered “a bold and imaginative one: the largest single water conservation scheme yet undertaken” in the country.

But the industry it was planned to supply was already reducing its water requirements before construction started. It may have been one of the biggest water projects ever undertaken in Europe, but the reservoir now rests mostly idle. The water is rarely needed.

Ultimately, it was condemned as an expensive white elephant. It became, Ms Kennedy said, a victim of “the politics of promotion of mega-projects” and showed “unfortunately, engineering accomplishments were often marred by economic miscalculation”.

She argues that fixing Dublin’s leaks essentially creates a huge new “source” of water, which would make the Shannon project redundant,

This is a view, however, that is disputed by some experts, who warn Dublin will have major capacity issues in coming years compounded by population growth and climate disruption.

Irish Water, Ms Kennedy noted in her report to the committee, is nowhere near meeting its own 2021 leakage target. Indeed, “unaccounted-for water” has gone up, not down.

In April 2018, Irish Water said it was currently replacing about 25km of Dublin’s 9,000km of pipes a year. “This equates to an annual replacement rate of 0.3 per cent; well below Irish Water’s proclaimed 1 per cent target. London’s water supplier recently replaced 2,074km of pipes in just five years.”

Irish Water cites the disruption of replacing pipes, but in London, Thames Water found replacing the pipes reduced disruption by eliminating the need to repeatedly dig up the same stretch of tarmac to deal with repeat bursts.

The Irish utility’s policy when a pipe bursts is to patch it up. It told the joint committee that it only actually replaces pipes once there are “multiple frequent failures” and the pipes are bursting “three or four times” a month.

However, Ms Kennedy said the policy of pumping yet more water into the supply system while neglecting the pipes is a time bomb. “This is no longer just about leakage – there can be more efficient ways of reducing leakage than replacing the pipes – this is about a water supply system that has been neglected so badly for so long that it is now barely fit for purpose. It is about a thriving first-world city having to rely on third-world water pipes,” she said.

“Dublin has all the makings of a city in a powerful global position, in a world where water is an increasingly valued commodity. It has twice as much water as its householders and industry actually use. Its raw water reservoirs are large by international standards. But it has one major Achilles heel: its water pipes.”

Ms Kennedy has advised a number of groups opposed to the pipeline. She has always acknowledged the proposed route passes through a farm owned by her husband’s family near Nenagh.

She has furnished a detailed appendix to her latest analysis, which fact checks Irish Water’s statements made to the committee and compares them to the utility’s own reports and those of independent analysts.

Unless Dublin addresses its pipes – no matter how much extra water it pumps into one end of the supply system – there will be outages with every cold snap and prolonged drought, and misery for Dublin’s residents, she predicted.

“Irish Water claims that it is doing all it can to address the pipes but today we show, again, that Irish Water’s statements about leakage and about the Shannon pipeline are unreliable.”

In a letter to committee members, Ms Kennedy said its purpose is “to ensure you are aware Irish Water made statements to the joint committee that its own reports show to be inaccurate or misleading”.

While insisting her analysis did not amount to a suggestion of bad faith, she said there were issues about the project, on top of its immense cost, that remained unaddressed.

Tomorrow: Contrasting views on the Shannon pipeline project. Plus: Ireland must find a new way to get major infrastructure projects over the line