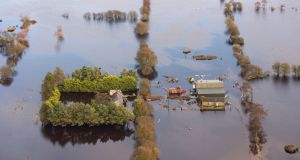 Flooding along the banks of the Shannon River near Athlone Town in 2015. Photograph: Brenda Fitzsimons/The Irish Times

The “first real Shannon maintenance scheme since Queen Victoria” will start to pay off this winter as flood protection, water-level management and works on the river channel protect homes and farmland.

That is according to a progress report on Shannon flood protection measures from Minister for the Office of Public Works Kevin Boxer Moran.

However, the Athlone-based Independent TD said while several schemes have been completed, river maintenance was far from finished and would be ongoing.

Mr Moran said that in the 2½ years since the Shannon Flood Rick State Agency Co-ordination Working Group – known as the Shannon Group – was set up, key progress had been made on water levels, obstacles had been removed and “pinch points cleared”.

The work is aimed at preventing the kind of severe flooding which had caused widespread hardship particularly in the towns of Carrick-on-Shannon in Co Leitrim, Athlone Co Westmeath and Limerick.

Towns such as Ballinasloe on the Suck, a tributary of the Shannon in Co Galway, were also severely affected by the floods as were thousands of acres of farmland in the Shannon Callows and elsewhere.

The Shannon Group has already taken a decision to lower the winter water levels on Lough Allen in counties Leitrim and Cavan to help mitigate potential flood risk from this vast body of water at the head of the river. The river has been lowered by about 0.7m for the last two winters and will be lowered again in winter 2018/2019, on a trial basis.

Mr Moran said work on the weir at Jamestown in Co Leitrim was also being considered as ushering the flow of water through would help drainage and possibly prevent some flooding at Carrick-on-Shannon .

Other “pinch points” on the journey south such as the weir at Tarmonbarry were also being looked at.

He said flood protection measures had been completed around homes at Iona Villas in Athlone which have been flooded in the past. In addition an earthen barrier was almost complete at Brick Island, as was a wall at Priory Park. He said the works should be in place before winter.

Also in Athlone Westmeath County Council has lodged a planning application for the Park downstream of the Strand. Mr Moran said a “small window” from September to the end of October had been identified as a period where plant and machinery could be used at the Park without having too severe an impact on the eco system there. He said the good weather earlier this summer had been fortuitous and good progress had been made in Athlone.

In relation to clearing trees and other obstacles down river, he said there were parts of the Shannon where “the river was 38ft to 40ft wide and now it is 60ft to 70ft wide”.

North of Lough Derg the ESB has responsibility for the Shannon banks and has been involved in work to prevent flooding.