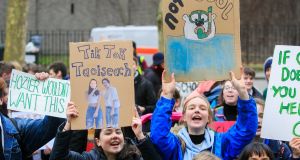 Ella Jones (left) and Alannah Walsh from Killiney during a Climate rally to keep environmental issues to the forefront of voters minds on Kildare Street, Dublin on Friday. Photograph :Gareth Chaney/ Collins

Turnout for the protest was down significantly from the climate strike last September, which saw over 10,000 young people take to the streets in a movement inspired by Swedish teenage activist Greta Thunberg.

The original plan for the protesters to gather near the bottom of Grafton Street and march to Kildare Street was abandoned, after safety concerns were raised by gardaí.

Instead the protesters gathered at Kildare Place, near Leinster House, where speakers climbed up onto the Statue of William Conyngham Plunket to deliver speeches to the crowd.

The protest was organised by Fridays for Future Dublin, with several smaller demonstrations taking place elsewhere across the country.

An Garda Síochána had previously “expressed significant concerns about the protest as currently planned from a health and safety perspective”. This was due to fears large crowds gathering on Grafton Street at lunchtime on a Friday could potentially lead to crushing.

In the end significantly fewer students than the expected 2,000 attended the protest, which numbered several hundred.

Sarah Little, a 17-year-old student from Loreto girls school, Bray, Co Wicklow, was among the crowd. Climate change was “a really important issue and I think the Government needs to pay more attention to it”, she said.

“It does feel pretty hopeless because there is so much that needs to be done and there’s such a short amount of time to do it, but I think if everyone tries we can make an impact at least.”

She would have liked to be old enough to vote in the general election on Saturday, but despite seeing climate change as a key issue would not necessarily vote for the Green Party, she said.

“Probably an Independent, like Valerie Cox, or the Green Party, maybe Sinn Féin,” she said.

“I don’t know about politics in general, but definitely there is a lot of interest in climate change and to stop that from happening.”

1 Transmission of Covid-19 on flight into Ireland linked to 59 infections
2 Covid-19: Public urged to ‘stay at home’ as 1,025 further cases confirmed in State
3 Two hundred Irish retailers for all your online Christmas shopping
4 Couple found guilty of murdering Irish dancer with ‘devil’s breath’ drug
5 Effectiveness of Covid-19 vaccine could be known before end of year – Fauci
Real news has value SUBSCRIBE