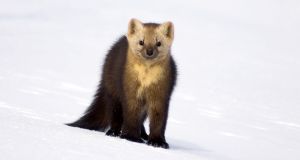 A sable is a small carnivorous mammal. File photograph: iStock

A sable that was being kept as a pet in Co Cork was found to be carrying a virus associated with rabies, the Department of Agriculture has said.

The small carnivorous mammal showed evidence of being exposed to lyssavirus following a series of tests this month. The lyssavirus family of viruses includes rabies.

The department says it became aware of a sable displaying erratic behaviour at a private premises in Co Cork, where it had been imported and kept as a pet, on January 7th. The animal was euthanised as the investigation could not rule out a rabies infection, as per the department’s procedures.

Initial screening tests on the sable were negative. On January 23rd, a further test by the European Reference Laboratory (EURL) reported evidence of lyssavirus genetic material in brain samples from the animal.

“Based on these EURL results, rabies cannot be ruled out in the sable,” the department said in a statement.

Rabies is a serious viral disease affecting the nervous system of humans and animals. It mainly affects carnivores but can affect any mammal.

A small number of people who had potential risk exposure to the animal have been identified and the Health Service Executive is following up.

There is no evidence the sable had contact with animals outside the household, and the likelihood of the virus spreading to other animals in the area is low.

However, the following precautions are being put in place within an 8km surveillance area in Co Cork: gatherings of dogs, cats or ferrets – including hunting, sales, fairs, etc, will be prohibited – and any found-dead animals in the area should be reported to the department.

The measures will remain in place for one month, subject to review.

Owners of cats, dogs and ferrets in the area have been asked to keep an eye on their pets’ behaviour.