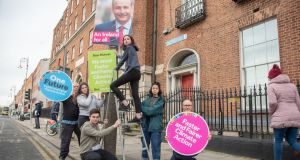 Frustration is mounting among young people at the lack of political action on the climate crisis and a sidetracking of the issue during the election campaign, the student activist group Fridays for Future (FFF) has said.

Despite “repeated statements from political parties claiming to take the threat of climate breakdown seriously”, the group, which has been involved in the Greta Thunberg-inspired school strikes for climate, accused candidates of failing to commit to necessary actions to address the crisis.

Members of the group, who cannot vote in next Saturday’s election because they are too young, delivered a list of nine demands at the Dublin headquarters of Fine Gael and Fianna Fáil on Friday.

“We cannot vote. We won’t be able to vote until the next election, but this is important for our future,” said FFF spokeswoman Réiltín Courtney.

Speaking outside the Fine Gael office, she said some parties were doing well on the issue “but it’s really down to individual candidates”.

The protesters erected a poster saying “Dear Leo, We want faster and fairer action” on a nearby lamppost before moving to Fianna Fáil’s offices.

The protest was in support of the “One Future Ireland” campaign run by a large number of NGOs seeking greater urgency and more meaningful supports to ensure a just transition for those worst affected by decarbonisation.

“We have been striking from school every Friday for 60 weeks, and have brought thousands of young people out on the streets on numerous occasions, demonstrating the support for climate action,” FFF member Beth Doherty said. “Government and politicians have expressed support and admiration, yet their actions are vastly different to their words.”

The group delivered a “list of shame showing harmful decisions made by the people in power since we began our strike, which has directly contributed to climate breakdown”. This includes support for the construction of a new gas terminal in Shannon to process fracked gas from the US; a wildlife Bill, which de-designates blanket bogs to allow more commercial turf cutting; and the blocking the Climate Emergency Measures Bill.

One Future Ireland is running a “candidate hunt” on Saturday to turn the tables on those seeking election and question them on what it sees as key steps to avoid climate breakdown. The main demand is for the next government to commit to reducing Ireland’s emissions by at least 8 per cent every year.

Meanwhile, an analysis of Dáil voting records has been compiled by activist group Not Here, Not Anywhere, which gives election candidates a “climate score” based on past support for key climate change Bills.

Modelled on a similar exercise undertaken by the Guardian before the UK election in December, voting records on the Bills were evaluated for candidates who served as TDs between 2005 and last year.

Scores were also calculated for each party with Fine Gael scoring just 2 per cent, whereas the Social Democrats, the Green Party, Independents for Change and Solidarity/People Before Profit all achieved a score of 100 per cent.

“The climate score won’t tell you everything you need to know about your local candidates; for example, we can’t give any first-time candidates a score” said Brian Cuthbert, who conducted the analysis. “But, during an election in which many politicians are making big promises on tackling climate change, our climate score shows which of them have taken action when they were actually in power.”

The concept and methodology were peer reviewed by academics from UCD and DCU. Dr Andrew Jackson, of UCD’s Earth Institute, said: “The climate score is an excellent tool for allowing people to quickly evaluate the climate action record of their candidates.”