Seagulls in Dublin accused of creating ‘uncivilised and dangerous’ conditions 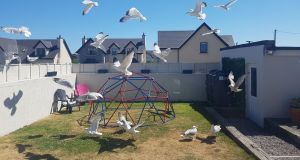 Seaside towns in north Co Dublin are battling against “uncivilised and dangerous” conditions because of the State’s failure to deal with rapidly-growing local seagull flocks, it has been charged.

Pleas for action are revealed under a Freedom of Information application to Fingal County Council, which sees residents and community groups across north Co Dublin demanding action.

Describing the efforts to curb the population of seagulls to date as a “total shambles”, Balbriggan residents said the birds were becoming more and more aggressive.

They said the Department of Culture, Heritage and the Gaeltacht has shown “an utter disregard” for the welfare of the public, saying its actions to date have been nothing more than a “whitewash”.

There are now 5,000 breeding gull pairs in north Fingal, who will produce 20,000 chicks by the early summer, Balbriggan residents complained last December, describing the situation as “ludicrous”.

They said three breeding seasons have passed since they first asked for help, adding that businesses in the town were facing “major recurring cost from damage”.

“The impact on residential areas are uncivilised and dangerous, as is the case for many of our schools,” it noted, adding that “rapidly expanding, high density urban seagull colonies are causing havoc in communities”.

“This must stop now,” the group went on, saying the Department of Culture was “wittingly perpetrating a foolish deceit on our society” by not dealing with the growing flocks.

“People will not accept the marring of daily life by a rampant, dangerous pest species, and exposure to serious public health and safety threats while the situation escalates rapidly out of control,” the groups went on.

Tom Cardiff, a founding member of a Balbriggan committee set up to address the gulls’ issue, said: “Citizens deserve a proper public administration response to the issue, and this is already long overdue.”

However, it cautioned that the 2018 derogation allowing people in Balbriggan to remove eggs and nests from their properties made it difficult to accurately fix the number of breeding gulls in all three towns.

In an email dated January 16th, Department of Culture official Gerry Leckey said derogations under the EU Birds Directive to deal with birds posing a threat to public health and safety or to air safety were reviewed annually.

The current derogation, running from May 1st, 2018 to April 30th, 2019, allows for nests and eggs to be removed in Balbriggan for “public safety reasons”, but the culling of seagulls is not permitted.

A consultative committee which will review the impact of gulls on urban communities over the next two years, and to identify actions to be taken by the State, will take place shortly.