Concern over low uptake of grant for lead pipe replacement 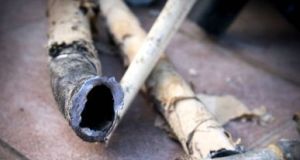 In a test at one property in Sutton, north Co Dublin, lead contamination was nearly 15 times over the legal limit considered safe to drink. File photograph: Getty

Only 71 households have availed of State grants to replace potentially harmful older lead pipes in their homes since the scheme was set up three years ago.

Just 12 applicants were approved for grants in Dublin City Council’s area, where a significant amount of homes have older lead pipes.

On Monday, The Irish Times reported tests had found unsafe levels of lead in drinking water in more than 30 areas across the country, according to figures from Irish Water.

In a test at one property in Sutton, north Co Dublin, lead contamination was nearly 15 times over the legal limit considered safe to drink.

Health Service Executive guidelines state that long-term exposure to lead can affect brain development in children or unborn babies. It can also cause harm to kidneys and high blood pressure, and is classed as a probable carcinogen.

There is concern among officials at the low uptake of the household grant scheme to replace lead pipes in private properties, run through the local authorities, and funded by the Department of Housing.

Irish Water is engaging with the Economic and Social Research Institute (ESRI) on a study examining behavioural change to “help identify ways in which greater take-up can be encouraged”, according to a department spokesman.

Since 2016, €186,444 has been paid out to help homeowners replace lead pipes and plumbing in their homes.

Limerick City and County Council has the highest uptake rate for the grant, with 22 successful applications, followed by Galway City Council at 13 grants.

Out of 31 local authorities, 14 have not paid out funds to any households under the scheme since it was set up.

Where local authority audits of water quality find lead concentrations over the legal limit of 10 micrograms per litre, the council notifies Irish Water. The water utility then follows up with affected properties, along with the Environmental Protection Agency and HSE.

The testing is carried out at properties on a random basis, but aims to ensure a geographical spread of sampling across areas.

Irish Water has said there are no lead water mains in Ireland, “however there are still some lead pipes remaining in the public network”, such as pipes connecting mains to homes.

A spokeswoman for the water utility said these lead pipe service connections, running from the road to private properties, accounted for about 10 per cent of lead contamination, in homes which also had lead plumbing.

“So ultimately in most cases lead in the water is as the result of lead plumbing in the property,” the spokeswoman said.

Where the water utility carries out replacements, connecting households can opt-in to replace their internal lead plumbing as well. However figures from Irish Water show only 800 homes had availed of this offer, as of the end of last month.

The low uptake of State grants for lead pipe replacement was “certainly disappointing” and the conditions on the scheme needed to be reviewed, he said.