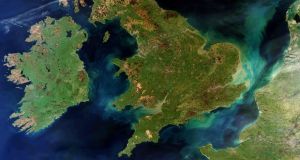 ‘It is likely that Brexit (in any form) will interfere with Good Friday/Belfast Agreement cross-border co-operation and place obstacles in its way in general, but in particular in the area of environmental co-operation,’ the report staes. Photograph: European Space Agency

A no-deal Brexit and the potential for a border with Northern Ireland threatens “innumerable problems” for future environmental projects and standards, a new report has warned.

Its authors also say there is the potential for a loss of joint-action on environmental crime in the region once Britain leaves the EU.

While some of the regulatory questions surrounding environmental issues could be solved through future policy alignment, the report outlines concerns this may be undermined by the “taking back control” narrative that has accompanied the protracted Brexit process.

Brexit, The Good Friday/Belfast Agreement and the Environment: Issues Arising and Possible Solutions was launched in Leinster House on Tuesday.

The report looks at how environmental issues and projects have enjoyed a shared approach since 1998 and how this could be undone depending on the circumstances under which Britain leaves Europe. It was commissioned by the Environmental Pillar and Northern Ireland Environment Link (NIEL), and written by barrister Alison Hough.

A disorderly exit could “cause a major environmental headache on the island of Ireland” in the absence of a clear common rulebook regarding species, emissions, water quality and hazardous waste.

“It is likely that Brexit (in any form) will interfere with Good Friday/Belfast Agreement cross-border co-operation and place obstacles in its way in general, but in particular in the area of environmental co-operation,” it says.

“A hard border or a customs border would represent a potential physical obstacle to cross-border environmental projects, potentially causing innumerable problems from movement of staff on projects and goods necessary for the carrying out of projects, to the more abstract problems cause by regulatory divergence and governance changes as a result of Brexit.”

Concern points north in particular – the report notes the Belfast Agreement emphasis on environmental issues was partially a reflection of “a long history of failure” by Northern Ireland authorities to maintain standards.

This track record, coupled with the potential to neglect existing environmental standards established over the last two decades in the event of post-Brexit regulatory divergence, could mean “the actual gap in environmental protection will be much greater on the ground than the gap on paper”.

The specific threat posed by Brexit is the loss of a shared or harmonised regulatory approach that comes with common EU membership. With a potential for divergence at Westminster in the aftermath of the UK’s departure, and of questions over who will oversee environment policy in the North, the report’s authors believe market pressures could lead to deregulation pressure.

The existing oversight provided by the Court of Justice of the European Union (CJEU) will also disappear.

While future regulatory alignment is both unpredictable and problematic, the report does suggest that common environment protections north and south of the border could be protected as an issue of human rights.

“This could provide a potential avenue for enforcement of some of the commitments in the GF/BA, where they impact on an individual’s right to a clean and healthy environment, by asserting environmental rights,” it said.