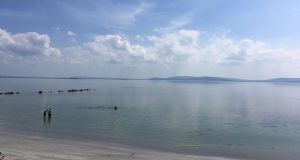 Temperatures will be well above average for the middle of April this weekend, although the warmest temperatures are expected to shift to the east on Saturday.

Temperatures hit 22.9 degrees in Carlow today, making it the hottest day of the year so far.

This temperature recorded by Met Éireann at Oak Park was just slightly higher than the 22.2 degrees recorded at Grange, Co Meath, and the 21.1 degrees recorded in Mullingar, Co Westmeath, on Saturday.

As the country basks in beautiful sunshine this Easter bank holiday weekend the good news is the fine weather looks set to continue for a few more days at least.

It all means temperatures are well above average for the middle of April this weekend.

“The west enjoyed the best temperatures on Friday but it’s much cooler there today,” said meteorologist John Eagleton. “The cloud has increased across Connacht and northwest Ulster due to a subtle change in wind direction.

“The wind was easterly on Friday, and in that situation the west of the country always does best. But now it’s gone more westerly. It’s not much of a breeze worth talking about but it means the best temperatures will shift to the east on Saturday.

“It was 22.5 degrees in Finner on Friday but it will probably do well to get up to 15 degrees on Saturday. It might even be less than that because it’s a little bit damp up there with bits of drizzle floating around.”

Mr Eagleton said the forecaster was predicting temperatures of about 22 degrees in the east on Saturday, but added he “wouldn’t be surprised” if Friday’s temperatures were eclipsed.

“We’re forecasting 22 degrees for the east,” he said. “It will be pretty good all over Leinster with temperatures of about 21 or 22 degrees, and much of Munster too where they’ll be about 19 or 20 degrees.

“It could come in higher. If we’re going to get a hotter day than Friday this weekend, it will be Saturday. I wouldn’t be surprised if it did happen. But temperatures on Sunday will be down a degree or so.

“The winds will shift back slightly to the east on Monday, and it should improve in the west. Temperatures could get up to 19 or 20 degrees.”

‘Make hay while the sun shines’

The reason for the warm weather is an area of high pressure that is down over Europe, bringing dry sunny conditions to the continent, feeding mild air in over Ireland and keeping the active weather systems out to the west.

In the longer term, Mr Eagleton said the weather would remain fine up to Wednesday but that it would get cooler from Thursday onwards. “We’re looking at 10 or 11 degrees next weekend,” he said. “We won’t know ourselves, so make hay while the sun shines.”

Showery weather is expected on Wednesday.

Water safety chiefs have warned people taking to the coast and inland waterways over the weekend about cold temperatures in the water.

John Leech, chief executive of Irish Water Safety, said water temperatures will be about half of what the air temperature is.

“So we want people who are not used to swimming to wear wetsuits and people who are going out canoeing, kayaking, stand up paddle boarding, or whatever activity it is, to wear drysuits - and obviously all of those must be wearing life jackets.”