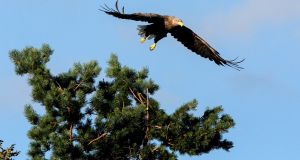 White-tailed sea eagle Caimin, who with his late partner, Saoirse, became the first of their species to successfully breed in the wild in Ireland for more than a century. Photograph: Arthur Ellis

Eagle watchers in Co Clare have been following a domestic situation playing out around a nest on Lough Derg with great interest since last year.

White-tailed sea eagles Saoirse and Caimin in 2013 became the first of their species to successfully breed in the wild in Ireland for more than a century and made their home on the lough.

However, Saoirse, who was brought to Ireland in 2009, last year contracted bird flu strain H5N6, which proved fatal.

“It was very sad after [Saoirse] died, [Caimin] was staying very close to the nest area,” said Vera O’Rourke of Mountshannon Eagles organisation.

“He was perched on their favourite tree ... You could tell that he knew something wasn’t right. Eagles do mate for life if they can find the right partner, and I think Saoirse was the right partner for him.”

Days after the body was discovered on the eagles’ nesting island in the lough, members of the organisation saw Caimin flying with another eagle, Caltra – his and Saoirse’s daughter.

She had inexplicably made a journey back to the area where she was born for the first time in three years to be with her grieving father.

Eagles are fiercely territorial, even within families, and local eagle watchers were taken aback by Caltra’s arrival.

“We could see them flying together and being close to each other for a few days. I thought it was incredible,” Ms O’Rourke said.

“I thought to myself, she must have known somehow, but how could she? It was very strange, very unusual. She stayed around, too. She was around for a good few days before she left again.”

Caltra is one of five white-tailed sea eagles fitted with GPS transmitters, which allows them to be monitored by the Golden Eagle Trust. According to the transmitter, Caltra spent almost all of the three years before her mother’s death around Fermanagh and Donegal.

She then made a round trip of some 500km from Lough Erne in Fermanagh to her father at Lough Derg before travelling north again to Lough Swilly in Donegal.

After spending the winter in Donegal, Caltra returned to the Lough Derg area last month, where she appears to have settled with a local widower, who lost his partner to suspected bird flu around the same time that Saoirse died.

“We saw Caltra with a bird at another nesting site around St Patrick’s Day and the two of them paired up,” said Dr Allan Mee, project manager of the White-tailed Sea Eagle Reintroduction Programme.

With Caltra now making a home close by, Caimin continues to protect the territory won by himself and Saoirse, and there are hopes that he will be able to attract a new female to his nest.

“We still see him all over Lough Derg; he is patrolling their area and waiting,” said Ms O’Rourke.

Dr Mee said Caimin, who at 11 years is middle-aged in white-tailed sea eagle terms, could go on breeding for a number of years in Mountshannon.

“He is on the look-out for a mate, and I think it is just a matter of time before a female does show up for him.”