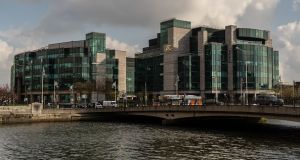 Extreme flooding events in some US coastal areas could double every five years if sea levels fuelled by climate change continue to rise, according to research by a US government agency.

“Once-in-a-lifetime extreme water levels – which are currently reached once every 50 years – may be exceeded daily along most of the US coastline before the end of the 21st century,” US Geological Survey researchers conclude.

Sea level rise is a global problem with various predictions of a rise of up to two metres by 2100. It is already impacting on Ireland with bigger storm surges exacerbated by sea level rise.

“Sea-level rise will radically redefine the coastline of the 21st century. For many coastal regions, projections of global sea-level rise by the year 2100 (eg 0.5 to two metres) are comparable in magnitude to today’s extreme but short-lived increases in water level due to storms,” they add – their study was published in Scientific Reports.

The scientists including researchers from the University of Illinois and University of Hawaii, investigated the frequency of extreme water levels measured by 202 tide gauges along the US coastline and combined data with sea-level rise scenarios to model the rate at which flooding events may increase in the future.

For 73 per cent of the tide gauges, the difference in water level between the 50-year extreme water level and the daily average highest tide was found to be less than one metre, and most sea-level rise projections exceed one metre by 2100.

Low-latitude areas will be most susceptible, with their rate of coastal flooding predicted to double every five years. At the most susceptible sites, along the Hawaiian and Caribbean coast, the rate at which extreme water levels occur may double with every centimetre of sea-level rise. Beach and cliff erosion is likely to accelerate in concert with increased flood risk.

Climatologist Prof Peter Thorne of Maynooth University said in an Irish context it was undeniable that rising global sea levels will exacerbate risk of both nuisance (repeat) flooding and storm surges.

“But the change in storm surge risk is dependent upon whether we see increased storminess such as we saw in February, and to a considerable extent luck as to whether the storm surges phase or do not phase with high tides and, in particular, spring high tides; and for cities like Cork and Dublin with high flows down the Lee and Liffey,” he added.

To say the increased risk will be exponential may be pushing it a bit far. “Even if it has an exponential form it’s a very flat exponential relative to for example the Covid-19 exponential that will be foremost in the public’s minds at this time.”

A metre of sea-level rise by century end was at the high end of estimates in 2019 UN Special Report on the Ocean and Cryosphere in a Changing Climate, he noted. That would be due a combination of the world “following a very (many now say implausibly) high emissions scenario together with a higher end climate system sensitivity”.

Prof Thorne added: “If, instead, we follow a low emissions scenario and there is low sensitivity we could instead be looking at 30 to 50cm of rise in global mean sea level. Our collective choices matter.

“Sea-level rise is slow, yet consequential and accelerating. Upper-end sea-level rise scenarios could displace hundreds of millions of people by the end of the 21st century. However, even small amounts of sea-level rise can disproportionately increase coastal flood frequency,” the US authors note.