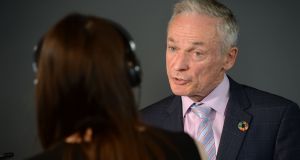 Richard Bruton: “It is crucial that as we rebuild we make structural changes which will break the link between fossil fuels and economic progress. We must embed climate resilience as part of our recovery.” Photograph: Dara Mac Dónaill / The Irish Times

The Government has indicated it fully supports a green deal being central to a new economic recovery plan at EU level – and aligned itself with 12 other member states.

The move was endorsed by Minister for Environment and Climate Action Richard Burton. A total of 12 EU environment ministers had aligned in calling for the European Green Deal to be the central tenet of the post Covid-19 recovery process in response to a letter from the Green MEPs.

“It is crucial that as we rebuild we make structural changes which will break the link between fossil fuels and economic progress. We must embed climate resilience as part of our recovery,” he said.

Prioritisation of the Green New Deal, together with action on climate and biodiversity is part of the framework for government document published by Fine Gael and Fianna Fáil on Tuesday.

Green MEP for Dublin, Ciarán Cuffe said he and party colleague in the European Parliament, Grace O’Sullivan, had written to the minister on Wednesday expressing concern Ireland had not joined with 12 other European colleagues “in committing to a green post Covid-19 recovery for Europe”.

“We are delighted to receive word from the minister confirming Ireland will sign the declaration placing the green deal at the heart of the EU’s post-pandemic recovery plan,” he added.

“However, in light of the leaked information coming from the Commission around delays to the European Green Deal, we are calling on the Government to stand firm in its commitment and work to ensure the Commission do likewise,” Mr Cuffe said.

Green MEP for Ireland South Grace O’Sullivan welcomed confirmation that the Government was backing a green deal that would be “a central part of a new economic recovery plan, both nationally and at EU level”.

The road to recovery would not be an easy one, she said, “but the best way to ensure we come out of this crisis on a stronger footing is to implement a recovery plan immediately, rooted firmly in the principles of the European Green Deal”.

Any delays, particularly in relation to food supply issues, would leave people even more vulnerable to the worst impacts of the climate and biodiversity crisis, she believed. “It is crucial that we make the correct decisions now and the green deal provides the roadmap for a resilient, carbon-neutral Europe. ”