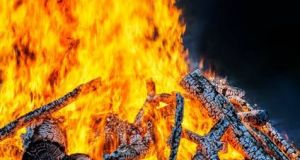 “Unfortunately the situation is probably being exacerbated by Level 5 restrictions, where more people are staying at home burning wood, coal and peat.” Photograph: Getty Images

Minister for Climate Action Eamon Ryan has said that the alarmingly high levels of air pollution in Dublin last weekend highlighted the need to tackle the underlying issues of particulates from fossil fuels.

The capital’s situation was worsened, said Prof Colin O’Dowd of NUIG centre for climate and air pollution studies, because of an increase in home fires.

“Unfortunately the situation is probably being exacerbated by Level 5 restrictions, where more people are staying at home burning wood, coal and peat,” he told The Irish Times.

He said the smoky coal ban must be extended nationwide to protect lives. “Owners of wood-burners, stoves and open fires in England will no longer be able to buy house coal or wet wood under a ban to be rolled out from next year.”

Mr Ryan said air pollution from these kinds of particulates was damaging to health, adding that the Government had banned smoky coal in 13 more towns and was moving towards a nationwide ban.

The Government would also publish a clean-air strategy. “The consultation document will include mitigation measures to address pollution from briquettes, sod turf and wet wood, as well as the extension of the ban on smoky coal.

“We are also addressing the issue of heating people’s homes in a healthier way through a major increase in spending on retrofitting, in particular for homes that are vulnerable to energy poverty.”

The Sinn Féin spokesman on the environment, Darren O’Rourke, said there was a need now for the coalition to make good on its clean-air strategy in the programme for government.

“We need to find alternatives to fossil fuels, and that needs to be driven by the Government. It’s a surprise, though, given that activity levels during Covid-19 should have been lower.”

Labour spokesman Duncan Smith said there was a sense that more people driving their cars during the pandemic as well as contraband smoky coal had contributed to the increase.

“We cannot return to the pollution we had in the days of smoky coal. The carbon tax may be a modifier of behaviour, but we need to see other measures to encourage ordinary households to be more efficient. Still, this is a wake-up call.”

“Ultimately the solution is to switch to domestic heating systems that are pollution-free at the house, and this Government plans to undertake an ambitious retrofitting programme which will involve the installation of electrically-powered heat pumps in half a million homes over 10 years.

“ In addition, we need an unprecedented modal shift to public and active transport in our urban areas to reduce pollution from vehicles.”

The full health consequences of air pollution were not known, said Dr Clare Noone, who is currently working on a study in Galway that investigates links between indoor and outdoor PM2.5 air pollution.

Moving away from burning coal and peat was “a win-win” for the climate and air pollution, but also Ireland’s balance sheet as 90 per cent of all fossil fuels used in the State were imported.