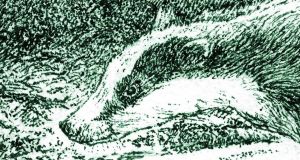 Badger deaths total 1,990 to date, heaviest on the Dublin commuter belt in Leinster, and in Co Clare and west Cork. Drawing: Michael Viney

Beyond the darkling hills of the Wild Atlantic Way, the big roads widen, straighten, point sweepingly from A to B. In the nights before Christmas I imagine them as rivers of light and dazzling reflections of wetness. Their 916 km of motorways link to many times that length of primary and secondary roads. This is one of Europe’s highest densities.

The toll of human traffic casualties is dismaying enough, but the annual toll on wildlife is also extraordinary, and reported deaths have never been so high.

They are listed on the website biology.ie, run by Cork ecologist Paul Whelan since 2005. Its roster of roadkill displayed on all-Ireland maps and its data inform the National Parks & Wildlife Service and the National Biodiversity Centre.

So far in 2020 – a year of some reduced driving, but greatly increased courier and delivery traffic – the list is headed, as usual, by badgers. Their deaths total 1,990 to date, heaviest on the Dublin commuter belt in Leinster, and in Co Clare and west Cork. The 1,377 foxes and 1,200 hedgehogs follow much the same pattern. The 348 pine martens died mostly on midland roads, and 302 otters mostly in the southwest.

The sightings are reported by Paul Whelan himself and by wildlife rangers and citizen scientists who know about biology.ie, have a GPS reading handy, and can be bothered to stop and check. So these are fractional numbers.

So much for monitoring mortality. Better news can be sought in the “mitigation measures” for wildlife to be found in the stretches of major new road that, even in these lean times, continue in planning and construction.

Wildlife plans for motorways are adopted by the National Roads Authority (NRA) and those for national and minor roads by Transport Infrastructure Ireland (TII). Many stem from EU directives on protecting habitats and rare species in conservation areas. And tracking patterns of roadkill help to put fences, trees, bridges and underpasses where they will save most wild lives.

Underpasses with side ledges have meant the most to mammals. Their use by badgers is shown in a study just published online, led by Aoibheann Gaughran, a Trinity College Dublin zoologist. Gaughran’s team tracked the movements of a large population of badgers for more than six years before, during and after major road construction of the M11 in Co Wicklow. Tracking collars were fitted to 80 of them and cameras watched their use of the completed underpasses.

They were steered to these culverts by badger-proof fencing along the entire 16km of motorway. The badgers’ territorial ranges stayed much the same – significant for concern about the spread of bovine TB – and the only two deaths to occur on the new road were from unfinished gaps in the fencing.

In the six years of the study, however, 49 badgers were killed on the N11 and minor roads in the area. At an average rate of 10 to 15 per cent a year of the badger population, this was 10 times the “relatively unimportant” roadkill rate suggested by an earlier University College Cork (UCC) survey of rural roads in 2012 and may reflect the growing intensity of Leinster’s traffic.

Underpasses can also serve a wide mix of wildlife. A UCC study of culverts under a bypass at Watergrasshill logged the passage of otter, fox, rabbit, pygmy shrew and field mouse (but not, apparently, any badgers).

Bats, too, figure in the NRA’s best practice guidelines and Ireland’s first bat bridge was finished in 2017. Constructed over the new M17 motorway in south Co Galway, this elegant green overpass, planted with hedgerows, is meant to serve highly protected lesser-horseshoe bats flying between roosts at Kiltartan Cave to feeding grounds at Coole Park.

Some of the most intensive research seeks ways to stop so many barn owls being killed on the roads. Their national population, declining over the past 40 years, is down to no more than 500 pairs and roadkill, particularly on high-speed motorways, is a major threat.

Three years of study led by John Lusby of BirdWatch Ireland and backed by TII have matched motorway expansion in the southwest, the barn owl’s stronghold. His surveys suggest an annual kill of 50 to 60 owls per 100 km, with hot-spots in Kerry and Tipperary.

Local contours can funnel the flights of dispersing juvenile owls, in particular, to lower points in the road, where belts of trees or other screens can help lift their flight-paths above the traffic. Wide grassy verges offer owls the prey of small mammals, so that narrower verges at key locations can reduce their attraction.

Lusby has presented such findings at international road conferences and he has written the Barn Owl Surveying Standards for National Road Projects, published on the TII website. Technical standards are good to see; implementing them in new road design may take a while.