Noise pollution affects animals’ communication with each other – research 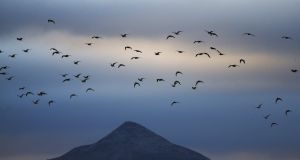 Flock of curlews with the Sugarloaf mountain in the background. Photograph: Nick Bradshaw

Noise pollution changes the signals of animals, hampering their communication with each other which “has an impact on their future survival”, new research led by Queen’s University Belfast has found.

The study found animals exposed to man-made noise had to adjust their acoustic signals when competing for mate attraction, to repel rivals and in parent to offspring communication, “all of which have a crucial role in their survival”.

The study, which is the first to look at a variety of different species and their response to noise, was published on Wednesday in Global Change Biology.

The researchers said man-made noise is largely from road traffic such as cars and lorries.

To conduct the study, they analysed data from 31 different animal species, such as frogs and birds and gathered information from 23 experimental studies that exposed animals to man-made noise. They compared each animal’s response to a baseline level, which is often the natural background noise levels in an individual’s habitat.

The researchers studied different components of each species’ acoustic signals, such as loudness, pitch, rate and complexity. They found that man-made noise changes the signals of animals, which hampers their communication, disrupting crucial communication cues with each other.

The World Health Organisation has said man-made noise is one of the most hazardous forms of pollution. In many habitats, noise from natural sources that animals are accustomed to is an important evolutionary selective force. However, man-made noise differs from naturally occurring noise because it is typically loud and low in pitch.

Dr Hansjoerg Kunc, lead author of the report and researcher at the School of Biological Sciences at Queen’s said there are important implications to consider around noise pollution and the protection of wildlife.

“This research proves man-made noise is clearly disrupting them from being able to hear and understand each other clearly, which has an impact on their future survival,” he said.

Dr Kunc added that conservation is “traditionally concerned” with preserving biodiversity and the habitats that organisms are dependent upon.

“Given the effects of noise on animals, pristine soundscapes free from man-made noise are crucial to ensure effective conservation,” he said.

“This research shows there is no doubt that tackling human-induced environmental changes, such as noise pollution, is a crucial societal and economic challenge that will ultimately determine the health of both ecosystems and organisms, including humans.”