River Barrow prepares for next hatching season of lampreys 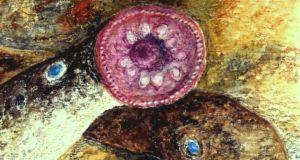 Lampreys are creatures of low public profile and, perhaps inevitably, some distaste.

A “Tasmanian Devil” of a sort quite unrelated to that beleaguered southern carnivore has a slim little body of shiny blue, fitted with plastic wings. These, one is promised, “cause the lure to swim in an irregular manner, darting and diving, simulating the movement of a wounded fish”.

Dozens of them will be cast across the river Barrow over the next few weeks by anglers on a long, grassy bank at St Mullins, Co Carlow, as spring tides draw shoals of a silverfish up the river from the ocean to spawn.

Ireland’s twaite shad, Alosa fallax, much like a blunt-nosed, deep-bodied herring, takes its migratory run from the sea in the first three weeks of May. The “tazzie”, as the anglers call their favourite, Australian, spinner, caught a record specimen of 1.64kg (3lb 10oz), in 2015. It will also land scores of these hard-fighting fish (“a mini tarpon” in one online encomium) for the pleasure of bringing them to shore on light tackle, with photographs and videos to remember the day.

Many fish are dropped at the bank and all, by custom, are safely released to return to their spawning. Ecologists describe this as “a noisy affair in which males and females rise to the surface and swim in a circular motion, splashing the surface with their caudal fins while releasing eggs and sperm”. The surviving adults return to the sea almost immediately afterwards, leaving eggs to hatch on the gravel a couple of metres deep.

The spawning ritual takes place at night, or its spectacle might well become one of the “ecosystem services” provided by the fish. Such incidental benefits are now to be assessed for the shad, as for all the migrant, “diadromous” species that enter Europe’s rivers to breed or feed, from salmon and sea trout to eels, sea lampreys and mullet. The eels and lampreys and their teeming offspring are important food for river wildlife, from otters and herons to river fish.

Lampreys are creatures of low public profile and, perhaps inevitably, some distaste. They are primitive-seeming parasites that feed on other fish by affixing a circular mouth studded with rasping teeth – a design, one might think, that inspired the machines that dig tunnels.

The sea lamprey is one of three kinds in Ireland, their evolution covering 360 million years. The most common and smallest is the brook lamprey, no more than 15cm long, non-parasitic, and living permanently in higher streams where it was isolated in the melting of the last ice age. River and sea lampreys differ greatly in size (the ocean-going sea lamprey can be a metre long) and in the size and pattern of their teeth.

Swimming up river to spawn, both river and sea lampreys use their mouths as suckers to move cobbles to make nests for their eggs. This engaging spectacle could, by report, be watched at the Annacotty Bridge on the river Mulkear in Co Limerick, a tributary of the lower Shannon. But the Annacotty weir is also, it seems, a major obstacle to lamprey migration. Thousands have been trapped below it at night, as photographed by Dr William O’Connor, a consultant ecologist with Ecofact and long an expert on lamprey behaviour.

Active with the Old River Shannon conservation group, O’Connor’s trenchant online articles have challenged river works that threaten lamprey survival. Many have been made for urgent flood relief, often without prior ecological assessment, and O’Connor has deplored the particular involvement in some of them of Inland Fisheries Ireland (IFI). No one fishes for lampreys, he points out, except to chop them up for sale as bait to pike anglers at €3 a chunk.

The IFI has just become one of the 30 organisations in EU coastal states joining the new DiadES project, which is based in France and aimed at conserving vulnerable migratory fish at a time of climate change. The IFI is, indeed, the state agency for the conservation and protection of these species. But where does this leave the National Parks and Wildlife Service as nominal guardian of Ireland’s natural world?

Its stake in the lives of lampreys was established in an early research manual in 1999. It stressed the need to protect the lampreys’ access to their spawning grounds from the sea. and warned against “barriers across rivers, changes to river and stream channels” and flash floods that wash away silt banks where the lampreys’ larvae live.

This was years before the big floods began. The hurry to reshape rivers, build new weirs, and rush faster currents to the sea will mean inevitably more losses from Ireland’s freshwater ecosystems. For our cobble-juggling lampreys, it could threaten the very reverse of King Henry’s lethal surfeit.