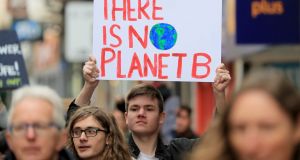 Students take part in a strike for action on climate change: Ireland has been singled out for its ‘lack of focus’ on targets. Photograph: Gareth Fuller/PA Wire

A national climate change plan submitted by the Government to the European Commission is “way off track” in meeting targets, according the EU’s leading climate change NGO.

Climate Action Network (CAN) Europe evaluated national energy and climate plans (NECPs) submitted to Brussels for approval by 24 member states. It concludes Ireland’s plan “does not demonstrate high ambition on energy savings and renewable energy, indicating a lack of focus in their actions for the next decade”.

NECPs are required to ensure member states will collectively achieve the bloc’s climate and energy targets for 2030.

In a report released on Monday, it concludes Ireland “is way off track with its greenhouse gas emission reductions in sectors such as transport, buildings, waste and agriculture... both for 2020 and 2030”.

Sweden, Portugal, Denmark, the Netherlands, Finland and France are in the lead, aiming to reach net-zero emissions by 2045 or 2050 at the latest.

Ireland is among states including the Belgium, Poland and Luxembourg with low ambition on emissions reductions; adopting renewable energy and embracing energy efficiency. “This is reflected in the insufficient level of their targets, the lack of concrete policies and measures, or the combination of both,” it adds.

Ireland’s national plan should include two five-year carbon budgets, which state the total carbon emissions it will emit during the period 2021 to 2030, it adds. The Government should also include climate impact assessments of all laws and policies by quantifying their emissions impact.

Such measures are in line with recommendations of the recent all-party report on climate action. It is understood a Government climate action report to be published shortly will be more ambitious than the draft NECP and signals a move to carbon budgets and climate-proofing measures.

Director of CAN Europe Wendel Trio said: “EU member states must see the writing on the wall and use the NECPs as a tool to set out clear pathways to transition away from fossil fuels and scale up the development of energy efficiency and renewable energy in line with the Paris Agreement goals.”

He singled out Ireland for planning to continue to invest in fossil fuels and gas extraction “all the way until 2030 and beyond, despite the European Commission’s proposal for the EU to achieve net-zero greenhouse gas emissions by 2050 at the latest”.

“Lukewarm commitments and actions will not allow the EU to become climate neutral by mid-century. The commission must make firm recommendations for improvements towards that direction,” Mr Trio added.

The commission will issue its recommendations to each member state in June before governments finalise their NECPs by the end of this year.

Following “the landmark report of the Joint Oireachtas Committee on Climate Action, the Government now has both a mandate and an opportunity to revise its targets in the next draft of the NECP, to bring it in line with the Paris Agreement”, said Jennifer Higgins of Christian Aid Ireland.

Catherine Devitt, policy coordinator of the Stop Climate Chaos Coalition, said the report “confirms what we have known to be true for a long time, which is not only is Ireland off track to achieving its targets, but that commitments and statements from the Department [of Climate Action and Environment] about ramping up ambition are still just words without concrete action”.