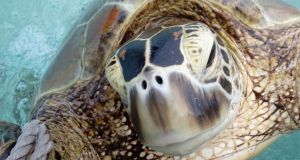 A population of sea turtles could become all-female in the near future due to rising temperatures, scientists have warned. Photograph: Christine Hof/ WWF-Australia/PA

Rising temperatures are turning almost all the green turtle population female in parts of the Great Barrier Reef, prompting scientists’ concern about their future.

A new scientific paper has warned the northern Great Barrier Reef population, believed to be the largest in the world and consisting of more than 200,000 nesting females, could eventually drastically fall without males. Environment temperatures play a role in sex-determination among green turtles — the proportion of female hatchlings increases when nests are in warmer sands while cooler temperatures produce more male hatchlings.

Most green sea turtles monitored in the Great Barrier Reef have been female for more than two decades, marine scientists found. Genetic and hormone analysis of the turtles in the northern and southern parts of the Great Barrier Reef showed 99 per cent of young sea turtles nesting on warmer northern beaches were female, while the cooler southern beaches showed a more moderate sex bias with 69 per cent female species.

Scientists said: “Combining our results with temperature data show that the (warmer) northern Great Barrier Reef green turtle rookeries have been producing primarily females for more than two decades and that the complete feminisation of this population is possible in the near future.

” The experts said it is the first time the animals have been tracked to their nesting beaches. The so-called pivotal temperature, which produces a 50/50 gender split, can be passed down from parent to offspring, but the range which would result in all-male or all-female varies by only a few degrees, scientists said.

The research published in the journal Current Biology warned: “With warming global temperatures and most sea turtle populations naturally producing offspring above the pivotal temperature, it is clear that climate change poses a serious threat to the persistence of these populations.”

WWF-Australia CEO Dermot O’Gorman added: “These impacts show that the Great Barrier Reef really is at the frontline of climate change. “Australia must adopt ambitious climate change targets that will save the Reef and its unique creatures. “Finding that there are next to no males among young northern green turtles should ring alarm bells, but all is not lost for this important population. “Scientists and wildlife managers now know what they are facing and can come up with practical ways to help the turtles.”

1 Growing hope in Government of partial easing of restrictions after May bank holiday
2 Coronavirus: Government to extend restrictions for at least two weeks
3 Coronavirus: More ‘striking’ evidence BCG vaccine might protect against Covid-19
4 Chief medical officer urges people not to visit hardware stores
5 Coronavirus: Ireland will have to ‘live alongside the virus’
Real news has value SUBSCRIBE