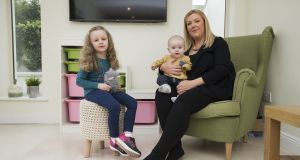 Claire Gill with her children Sadie (4) and baby Callum, at their home in Swords, Co Dublin: she put five-month-old Callum’s name down for an Educate Together school place five days after he was born. Photograph: Dave Meehan

The original spelling for Swords in north Dublin, according to a 14th-century manuscript on the life of St Columcille, was “Sord” or “Surd”, meaning “clear” or “pure”.

“In modern Irish the word so spelt bears the meaning of ‘order ... industry ... diligence’,” wrote the Right Rev William Reeves, a 19th-century historian. “The ‘w’ came into it after the settlement of the English, who wrote the name Swerds, though pronounced Swords.”

Today, Swords is among the largest and fastest-growing urban areas in the State as confirmed in the 2016 census, but local policymakers fear it could lose out if proposed Government planning guidelines are to be made law.

From humble origins it has swollen to the size of just under 40,000, helped by a burgeoning suburban population driven further from the city centre during the latest economic boom.

However, it is expected to grow dramatically. Fingal County Council predicts a population of more than 100,000 by 2035. By then, it will be officially an “emerging city”. By then, the long-promised Metro North should be completed.

The State’s National Planning Framework for the period up to 2040 is due imminently, and it will dictate the distribution of population, jobs and houses throughout the country.

The process has caused unease in the county council in particular, with an unpublished analysis carried out by the local authority in October envisaging a worst-case scenario where the growth of Swords is set at 25 per cent of its current population of 39,000 over the period of the Government strategy, as per the latest draft version.

The council document mentions continued uncertainty over how Swords will be categorised in the finalised National Planning Framework, and what effect this may have on growth targets.

A restrictive interpretation would mean the Swords metropolitan area could add only 200 residential units each year, as opposed to current plans to build an additional 1,500 units a year to accommodate an expanding population.

The latest Fingal Development Plan envisages an extra 8,828 residential units in the town by 2023, but 25 per cent population growth would allow for only 4,266 units by 2040 according to the analysis.

It is added that this could jeopardise the viability of proposed Metro North stations north of Dublin Airport, with work on the project not due to begin until at least 2021.

That said, the case against rapid expansion can appear compelling. The town centre, which locals still refer to as the “village”, comprises one shopping street along with the Pavilions shopping centre.

A multiplicity of satellite estates has developed around this core, some with their own retail facilities and amenities, and others largely dependent on the current town centre.

While acknowledging the constrained environs of Swords’ existing central business district, the new Fingal Chamber of Commerce chief executive, Anthony Cooney, is eager to point out the potential for retail and industrial sites at Airside and Swords Business Park.

As he sees it, Metro North is not only essential for accessibility to the city centre but may also serve to free up valuable business development space around the airport which is being used for long-term car parking lots.

Cooney is optimistic about the area’s capacity to grow but believes proper infrastructure in terms of roads and transport access needs to be established first, a point echoed by planner and civil engineer Kevin Brackfield whose consultancy firm is based on the outskirts of Swords.

Indeed, Brackfield says that, in an Irish context, it is not unusual to see the type of cart-before-horse development where estates are built and essential infrastructure only provided later.

“I think currently it’s just about adequate – it is a bit of a bottleneck but then again most successful towns are, to an extent,” he says of Swords, before addressing the great white hope of a light rail link. “Metro North is not going to solve the problems of the local infrastructure – that’s just going to be a link to the city which is going to help speed up the desire to live in or close to Swords.”

Himself a Swords resident, Labour councillor Duncan Smith is cognisant of its current difficulties in playing catch-up with a booming population, but he remains sanguine about the future.

He is able to list parcels of land to the north, west and south of the town that are zoned and ready for housing development, including the ambitious Lissenhall project near the old Dublin-to-Belfast dual carriageway which is slated to grow from almost nothing to a townlet of 30,000 within two decades.

Smith worries about possible curtailments placed on the town’s aspirations by central Government, be it intentional or otherwise, and he again harks back to the familiar theme of the Metro North being non-negotiable now that exchequer funding has been secured:

“If the [draft] National Planning Framework is only going to allow for 200 houses a year to go in Swords, that will kill Metro North as well as stopping houses being built that are needed for young people in Swords. It’s extremely worrying.”

Responding to a request for comment, a spokeswoman for the Department of Housing said application of the draft framework to individual counties and towns is “inappropriate and misguided”, and that the 25 per cent growth target will not necessarily be uniformly applied.

But speaking at a budget meeting last month, Fingal’s director of planning and strategic infrastructure, AnnMarie Farrelly, told councillors there were “anomalies” regarding how the draft framework applies to Dublin and that it needs to translate to “correct population projections” for the Fingal area.

A LACK OF SCHOOL PLACES

Schools across Swords have had much-publicised difficulties in providing enough places for future enrolments in an area that has a disproportionately young age profile.

Claire Gill’s case came to national prominence earlier this year when it looked like her daughter Sadie would be squeezed out of a junior infants place by virtue of being born at the wrong end of the month.

Gill petitioned the Minister for Education and even the Archbishop of Dublin over waiting lists and catchment areas, but to no effect.

Belatedly, she received the welcome news that her daughter could avail of a place at her local school due to someone pulling out a week after term began, but others on the 107-child-long waiting list were not so lucky.

“Sadie literally got the last place. The child that was number 16 on the list after Sadie was born a couple of hours after her, so it came down to time of birth,” she explains.

Gill is already panicking over the fraught issue of a secondary school place for Sadie in about eight years’ time, and she put her five-month-old son Callum’s name down for an Educate Together school place just five days after he was born.

“I’ve already had parents for 2018 contact me and say that they’re worried that their child isn’t going to get a place,” says Gill, who has taken on a campaigning mantle for stricken parents in the locale.

The problems associated with growing pains ostensibly appear just as severe for Fingal Community College, located across the road from the county headquarters, which has increased in size from 500 students in 2009 to 750 now, and has a 40-name waiting list.

Similar reports have emanated from other secondary schools in the area, but principal Sharon McGrath says the issue at that level at least is that parents want to send their children to particular schools, and she is of the belief that spare capacity does currently exist in the town.

However, with the demographics of Swords only going in one direction, she fears that even another secondary school planned for the north of the town will not save her own from having to split families in future as demand increases and the amount of places stays the same.

“If we’re not moved to a bigger site, I’m going to have to start refusing siblings, and that causes consternation in families,” she says, describing this as the potential “Armageddon” situation.