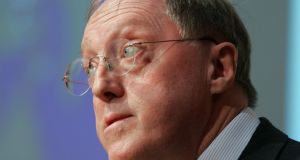 Prof John Sweeney said he reacted with dismay as weak aspects of the 2015 Climate Bill were incorporated into the Bill. Photograph: Frank Miller / THE IRISH TIMES

The Government’s Climate Bill to boost the national effort to reduce carbon emissions has come under sustained criticism due to vague language, lack of accountability and no sanctions for missing carbon budgets.

Separately, leading environmental groups – Stop Climate Chaos and the Environmental Pillar – released their detailed verdicts on “loopholes” and weaknesses in the proposed legislation, which they conclude could undermine efforts to enshrine climate ambitions in law.

The committee is undertaking pre-legislative scrutiny of the Climate Action and Low Carbon Development (Amendment) Bill 2020.

Prof Sweeney said he reacted with dismay as weak aspects of the 2015 Climate Bill were incorporated into the Bill. Language to pursue emission reductions, rather than defend against potential litigation, should be prioritised, while current wording should changed “from aspiration to commitment”, he added.

No matter what way methane from agriculture was counted, it had to be reduced, he added. “Sustained reductions of agricultural methane is demonstrably essential...for Ireland to achieve Paris [agreement] compliance and in furtherance of the State’s commitment to the UN sustainable development goals.”

On carbon budgets, there was a need for stronger commitment and accountability, Prof Sweeney underlined, as it was not clear who or what body bears responsibility for exceeding a sectoral budget target.

“Consequences, such as the relevant Government department being forced to buy quota on the open market from departmental funds, offers one possibility to incentivise sectoral compliance,” he suggested.

Former minister for climate action Richard Bruton said the easy part was putting “hit that number” targets into legislation; the hardest part was changing behaviours and ending addiction to fossil fuels. He questioned if sanctions for not meeting sectoral targets would be effective in that context.

Prof Sweeney said he was “not interested in fining or jailing people, or putting the Minister in dock, but in ensuring the State fulfils it climate obligations”.

The Bill as it stands “is very weak when compared to leading climate laws adopted elsewhere...That said,[it] could easily be strengthened,” Dr Jackson said.

Government should be required to report annually to the joint committee on whether the current net-zero target date, interim targets, the long-term strategy, the current plan and the carbon budget programme still represent Ireland’s “highest possible ambition”.

The Climate Change Advisory Council should be genuinely independent and include representatives from fields of law and just transition, and “the perspectives of youth and future generations”.

While the Citizens’ Assembly recommended, with 97 per cent support, that an independent body be resourced with functions to include pursuing the State in legal proceedings relating to climate change, “the present Bill appears to have been crafted with a view to avoiding legal accountability”, he observed.

“This is counter-productive: a weak governance framework will not see emissions fall, and falling emissions is the only thing likely to satisfy those who may otherwise turn to litigation. Further, litigation based on fundamental rights cannot be avoided by adopting a woolly climate law framework.”

In response to Senator Alice-Mary Higgins (Ind), he said the Bill as currently framed was “not robust at all” in the context of achieving 2030 targets, with much of problem being down to language.

“To stand a chance of limiting heating to 1.5 degrees, our emissions need to fall very deeply, very rapidly, starting immediately. We therefore have just one shot at getting this legislation right. We know that robust framework climate laws enable effective action, and we know how such laws are designed,” he added.

Stop Climate Chaos coalition (SCC) policy co-ordinator Sadhbh O’Neill said the Bill substantially improves the 2015 Climate Law but their analysis had identified “serious loopholes that could undermine the purpose of the law”.

“TDs and Senators have the opportunity now to recommend that these loopholes are closed and make the new climate law work as it was intended. Much of the progress on climate policy in recent years has come from TDs and Senators forging a cross-party consensus in the Oireachtas and driving official policy in the right direction. We urge them to do that again now,” she added.

The State should be required to “pursue and achieve” the 2050 objective of carbon neutrality and that target should be “at the latest”.

The definition of a carbon budget must be tightened to make it explicit that it will cover all gases and all sectors in a single national emissions limit,” SCC believed.

The Environmental Pillar, which represents 29 environmental and climate NGOs, noted “the twin crises of climate and biodiversity are deeply interlinked and must be addressed simultaneously, so a voice for nature on the council will be critical”.

The Minister for Climate Action and the Government “are not obliged to rationalise or provide evidence for their decisions and their subsequent impacts. Therefore, it could compromise transparency and accountability....It also does not protect against a future minister who may not be as ambitious as is required,” they warned.