Litter is increasing in Dublin city and on roads, survey finds 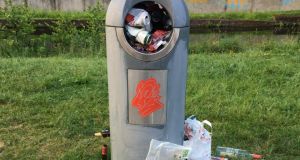 Cities and towns are getting cleaner, but the latest survey by business group Irish Business Against Litter (Ibal) shows increased litter levels in Dublin city centre and in disadvantaged areas of Galway, Limerick and Cork.

There was also increased evidence of littering on roads outside most major towns – this is based on the findings of surveys conducted by the environmental group An Taisce on behalf of Ibal.

According to the 2017 survey, there was a fall in the prevalence of fast food wrappers, plastic bottles and dog fouling. Chewing gum, cigarette butts and cans, however, continue to be major sources of litter.

Ennis, Roscommon and last year’s winner, Kildare, are vying for the title of Ireland’s cleanest town. The winner will be announced by Minister for the Environment Denis Naughten on Wednesday in Dublin.

An Taisce surveyed 25 towns and 15 city areas for Ibal’s latest “winter survey”. Of these, none was judged to be a litter blackspot, and only one – Galvone in Limerick – was designated as “seriously littered”. Some 88 per cent of towns were deemed clean; a slight improvement on the previous year.

A total of 40 per cent of towns and cities surveyed were judged to be cleaner than the European average. In contrast, city areas occupied six of the bottom seven places in the rankings. 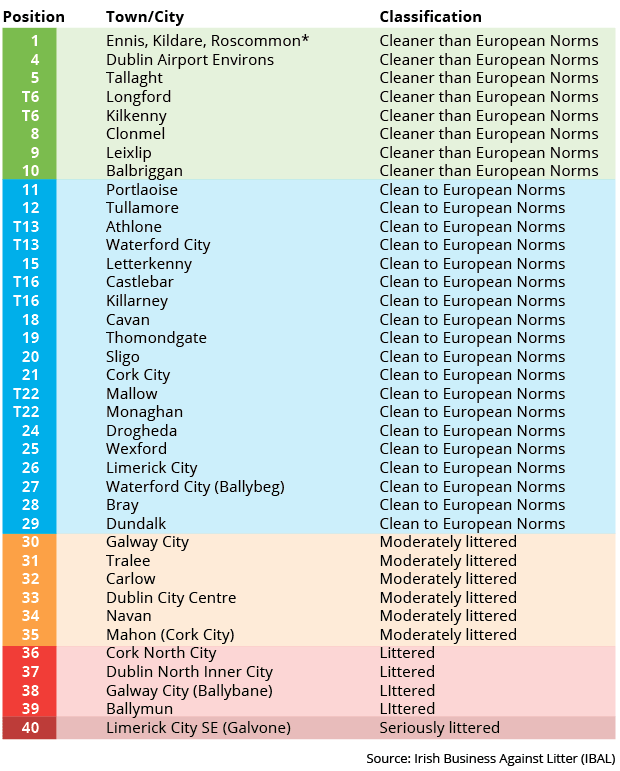 Waterford was again the country’s cleanest city, while Tallaght, previously a litter blackspot, climbed to fifth in the rankings and was deemed “cleaner than European norms”. Castlebar and Portlaoise progressed strongly in the rankings, but Navan and Carlow both fell to “moderately littered”.

While still littered, Dublin’s north inner city recorded its best-ever performance since it was first surveyed in 2011, with An Taisce noting an absence of litter blackspots or seriously littered sites.

“A starting point on the road to cleanliness is to concentrate on very bad sites and there are signs the council are doing this,” said Conor Horgan of Ibal.

In “seriously littered” Galvone in Limerick, by contrast, there was little improvement in several sites previously found to be seriously littered. According to the An Taisce report, “this suggests the city council are not getting to grips with the litter problem in the area”.

Continuing a trend of recent years, litter levels increased in Dublin city centre towards the end of the year. “The council have been successful in keeping our capital clean for the peak summer season, but less so when it is over. Cleanliness is not just for tourists – it should be year-long,” Mr Horgan said.

Roads leading in from Dublin Airport were exceptionally clean, but in general the survey found an increase in litter levels along roads connecting towns, with the majority “moderately littered”.

Progress in cities has been much slower than in towns, and much less consistent. “In this latest survey, for example, we have seen reversals in recent improvements in Dublin city centre and Ballymun, as well as in Galway city’s Ballybane and Mahon in Cork, in a way that we have not witnessed in towns,” Mr Horgan added. “This points to a lack of community involvement which is essential to keeping an area free of litter over time.”

Ibal said it was no coincidence the worst-performing areas in the rankings are among the least affluent in the country, as defined by the Pobal Deprivation Index.

“Products of poor planning, disadvantaged communities are prone to litter on two fronts. In the first instance, they tend to be neglected by the local authority, which concentrate their cleaning efforts on city centre locations. This is compounded by an absence of pride in the locality in these areas, where communities are often transient and amenities lacking,” Mr Horgan noted.

As a measure of the importance which business places on a litter-free environment, a specially commissioned public sculpture worth up to €40,000 will be erected in the winning town.