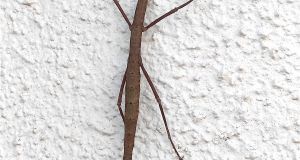 Every year many small tortoiseshell butterflies use this old castle for their hibernation. There must be 100 or so, and there are 16 in my bathroom. Recently I began to find butterfly wings on bedroom floors. I suspected a bat. Then something fluttered down and ended up fluttering against a window – a small wren. We released it and it flew away strongly.

I divide my time between two addresses, one in Limerick and one in Donegal. In the past three years I have noticed an increase in the amount of moss growing on my roofs and driveways. The Donegal driveway was surfaced 15 years ago and only in the last two years has moss appeared.

Moss reproduces by means of spores moved about by wind and water, which need wet conditions to take hold.

On the stormy days before Christmas, through my back window I watched the gulls playing in the wind currents over the neighbouring back gardens. They would allow themselves to be lifted up as if seeing how far they could go without moving their wings.

They were possibly rising on thermals from the surrounding houses.

We have a few of these fellows in the sage bush outside. The children love them.

It is the unarmed stick insect, Acanthoxyla inermis, which has been naturalised in west Kerry for about 60 years. It is a New Zealand species that arrived in these islands on imported plants. This is the first time it has been reported in Co Galway.

Ethna Viney welcomes observations and photographs at Thallabawn, Louisburgh, Co Mayo, F28F978, or by email at : viney@anu.ie. Include a postal address