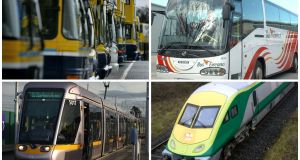 Passenger journeys on all modes of transport have increased since 2013.

Passenger journeys on public transport and commercial bus services have risen by 31 million since 2013, according to the National Transport Authority (NTA).

The NTA said there were 236 million journeys on public transport last year compared to 210 million in 2013.

All transport modes recorded an increase in passenger journeys with trips on Dublin Bus rising from 112 million to 125 million; Bus Éireann up three million to 32 million; Iarnród Éireann up six million to 43 million while there are now an additional three million people using the Luas to bring the annual total to 34 million.

She said it was remarkable this rise in passengers had been achieved with “virtually no increase in Public Service Obligation operating capacity as measured by seat kilometres nor in the number of licensed commercial bus operators”.

In 2016, Dublin Bus carried 53 per cent of all public transport users. Iarnród Éireann carried 18 per cent, Luas and Bus Éireann carried 14 per cent each, and private bus companies contracted to provide rural services carried one per cent.

The increase was in line with the recovering government exchequer figures, a National Transport Authority Spokesman (NTA) said.

Luas was the only transport operator to make a profit last year and now has cash reserves of €5.4 million. It was also the only operator to see a drop in passenger numbers in 2016 (1.6 per cent).

The authority pointed out that although Luas returned an operating surplus, “it should be remembered that all capital works such as the rail lines and the trams are funded by the exchequer.

All services experienced an increase in passenger revenue in 2016 with the Rural Transport Services seeing the biggest increase at 15.6 per cent.