Derry floods: ‘Water was coming in through the bricks’

‘I’ve lived in this area for 30 years and I’ve never seen it anything like this,’ says local 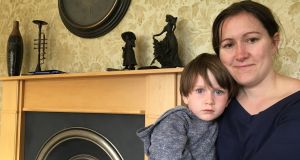 “We were wading up the street, up to our thighs in water in pyjamas and welly boots.” Dawn Grieve and her son Billy. Photograph: Freya McClements

The clean-up is under way in Co Derry for families whose houses were flooded after unprecedented heavy rain hit the northwest on Tuesday evening.

The worst affected areas were the villages of Drumahoe, where the river Faughan burst its banks, and Eglinton.

Dawn Grieve and her husband and two young sons had to be evacuated from their home in Ivy Mead in Drumahoe by tractor.

She said it rained from 1.30pm on Tuesday. When she and her husband looked outside their house at about 1pm, “The whole green area was just swamped, and the water was coming from everywhere.

“People were grabbing the sandbags or pillowcases, running out, filling them with sand and coming back.”

They helped out with other houses that were already taking in water. “Everybody was pitching in and helping.

“The water started seeping in to our house at about half-eleven, and we knew then we couldn’t stop it. We woke the boys at about half-one because we thought we had to try and get them out.

“We were wading up the street, up to our thighs in water in pyjamas and welly boots.

“The fear was that the manholes were rising everywhere, so we had to walk along the side of houses to make sure we weren’t hitting manholes.”

The fire brigade was at the top of the road. “There was so much water . . . it was nothing like I’d ever seen before,” said Ms Grieve.

“I’d rung my dad and he was coming to meet us but he couldn’t get in so we were stuck. It was terrifying, especially for the boys.”

Ms Grieve said a woman from the street rang her farmer sons, who came in a tractor and first ferried families with kids out of the area.

“We spent the night in my mum’s house but we’ve just come back to see the damage. My house is ruined.

“We’re going to have to get the whole lower floor, every bit of furniture redone. It’s going to be thousands of pounds.”

Ms Grieve said the thing that would really stand out in her mind was how much everybody worked together and helped each other.

“I went out to the car to get something and I heard the rushing of the water, then I flicked on a light and I saw it coming up through the fence.”

He described how, as the flooding progressed, the water rose to a foot deep in the house. “Nothing could stop it; it was even coming in through the bricks.”

“The water damage is shocking. The floors and the sofas are ruined, the toilet was overflowing. I had sandbags up against the door but it did nothing.

“I just went out then and knocked on doors to try and warn other people, but within 40 minutes the whole street was flooded.

“I don’t even know where to start with the house – it’s just heartbreaking.”

Throughout Ivy Mead on Wednesday there was furniture on front lawns and driveways as residents attempted to remove water – often contaminated with oil or sewage – from their homes so they could begin the clean-up.

Gareth Kennedy said the floods took him and his wife by surprise.

“We looked out and couldn’t see a bit of water, and then 10 minutes later it was part-flooded by the time we realised the water was up to the kerb, and then we started moving the cars out.

“We then came back thinking it was as high as it was going to go, because I’ve lived in this area for 30 years and I’ve never seen it anything like this. Before the houses were built here this never flooded; the Faughan river could always take it.”

He said that they helped others with sandbags and then realised the water was starting to come in to their house, so they started lifting everything they could upstairs.

“The fridge is lying on its side, and we’ve no heat because the water went over the oil burner. We’re staying in my mother-in-law’s house now.”

Derry City and Strabane District Council has activated its emergency plan. A council spokesperson said it was working with the relevant agencies to provide urgent support and assistance for those affected by the flooding.

Help centres have been opened at the YMCA in Drumahoe and Eglinton Community Centre. An emergency payment scheme is also in operation to help householders make their homes habitable.