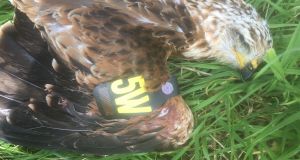 Handout photo issued by the Royal Society for the Protection of Birds of an endangered red kite which it said has been shot dead in Co Down. Photograph: Alan Ferguson/RSPB NI/PA Wire 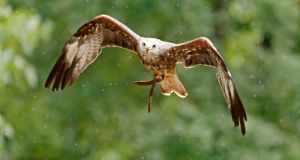 A red kite flies during a bird show in the Tripsdrill wildlife park near Cleebronn, Germany. Photograph: EPA

An endangered red kite has been shot dead in Co Down.

The bird, which was born in May, was found in a public laneway near Moneyslane last week, the Royal Society for the Protection of Birds said.

“Any loss of these under-threat birds is utterly heartbreaking,” said Alan Ferguson from the RSPB .

“Our red kite population in Northern Ireland is small at just 20 breeding pairs and that makes it particularly vulnerable to losses.

“It would appear that someone has deliberately targeted one of these beautiful creatures, so this is incredibly frustrating and upsetting and is a real setback for the future of the species here.”

Mr Ferguson said the society has been working on a red kite reintroduction programme for nine years.

“I really thought we were turning a corner, because persecution incidents seemed to be dropping off and the last confirmed shooting of a red kite happened in Crossgar in 2014.

“People have really taken the birds to heart and are happy to see them in our skies again.”

PSNI wildlife officer Emma Meredith said: “The PSNI take all reports of wildlife crime seriously. If anyone has information about the death of this protected bird then we would be really keen to hear from you.”