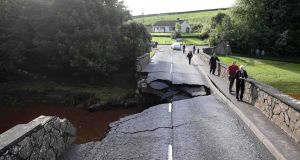 A section of road swept away by the flooding at Claudy, Co Derry. Photograph: Matt Mackey/Press Eye

More than 100 people had to be rescued in the northwest after heavy rain flooded homes and left Derry City virtually inaccessible by road. The freak weather also left a trail of destruction across the Inishowen Peninsula in Co Donegal.

Dozens of families have been left homeless, businesses ruined and bridges washed away after several hours of freak weather.

The Met Office said 63 per cent of August’s rainfall fell within eight to nine hours, causing widespread flooding and leaving motorists stranded in vehicles.  The Northern Ireland Fire and Rescue Service said t at the height of the flooding it was receiving an emergency call every 45 seconds.

Assistant chief fire and rescue officer Alan Walmsley said they rescued 93 people from either cars or property who had been trapped by the flood waters.

“Firefighters worked in extremely challenging circumstances to reach people. A number of roads were impassable due to flooding, and crews had to take alternative routes to attend some incidents.”

Among the worst affected areas was Drumahoe just outside Derry, where the river Faughan burst its banks, flooding homes and closing the main Derry to Belfast road.

Properties were also flooded in Eglinton in Co Derry. City of Derry Airport was closed after the terminal and the runway became flooded. In Claudy, Co Derry, a bridge was washed away on Cumber Road.  A number of roads in Derry were closed due to flooding and flood debris.

Hundreds of properties were without power across the North due to lightning strikes.

Derry City and Strabane District Council activated its emergency plan. A council spokesperson said it was working with relevant agencies to provide urgent support and assistance for those affected by flooding. A Department of Infrastructure spokesperson said the extensive clean-up would continue over the next few days.

DUP leader Arlene Foster said the floods had caused “devastation for businesses and homes in the northwest”, while Sinn Féin’s Northern leader Michelle O’Neill praised the emergency services and all those who worked through the night to combat floods.

The chairman of Institute FC, which is based in Drumahoe, said the club was flooded, and water on the pitches was eight feet high. “It’s just a disaster zone. You’d think a tsunami went through it,” said Bill Anderson. “All the pitches outside are still completely covered in water, and the playing pitch in the stadium is a foot deep in silt and debris. It’s just soul-destroying – we’re still in shock.”

Meanwhile, the Minister responsible for the Office of Public Works was arriving in Co Donegal on Wednesday night. Kevin “Boxer” Moran is due to spend Thursday seeing at first-hand the devastation caused by the flooding.

An emergency meeting of the Inishowen Municipal Authority has been called for Thursday at 11am to discuss a plan of action.

Senior engineer with Donegal County Council Brendan O’Donnell said it was impossible to plan for the kind of weather pattern which struck the area.

“It was simply unprecedented. I have never seen anything like it before. It’s not something we could have planned for. Sheer volumes of water could simply not get away, with many roads acting as rivers or water conduits.”

Donegal County Council has also activated its emergency accommodation plan, and says no family will be left without accommodation.

At least two bridges were destroyed, while other bridges, including Cockhill Bridge on the outskirts of Buncrana town, were damaged and had to be temporarily closed.

One van driver had a lucky escape when a huge crater opened up in the middle of the Quigley’s Point to Muff Road leaving his vehicle tipping nose-front into a huge drop.

Among the worst places hit was the village of Burnfoot. Several families had to be evacuated from their houses as water levels rose.

Businesses such as Floors R Us were left severely damaged. Owner Karen Doherty was filling sandbags and helping to secure businesses in Buncrana when she received the news that her business was under siege from the flooding. She has been left devastated after her showroom, which opened just over two years ago, was destroyed.

“Everything is destroyed but we will start again. We have to. I keep telling myself that other people are worse off than me. I just have to get on with it, and I can’t sit around crying about it. Somebody could have been seriously hurt or drowned. It’s only materials, but we have to start again from the ground up.”

Livestock was also lost in the flood, with one witness saying how he saw two donkeys being washed down a country road on the outskirts of Carndonagh.

Huge volumes of crops were lost, includes fields of corn at Grianan Estate in Burt.

Holiday-makers coming back through Derry and Belfast airports could not cross the Border into Donegal to reach their homes. Many were forced to remain in hotel lobbies and were thankful for the kindness shown by hotels such as the Everglades in Derry, which provided them with camp beds as well as hot soup and sandwiches.

Dunree Boxing Club coach Fergal Doyle went to visit the scene on Wednesday morning. “The placed is just totally destroyed, totally wrecked. Most of our equipment is gone down the river. It’s a disaster. The water was as high as the goalposts on the football field, the owner of the shed was able to tell us.

“We had a treadmill carried 60m away. We have a ring inside that 30 men wouldn’t lift and it was just moved as if it was a football being kicked away. That’s just the force of nature.”

On Wednesday night the brick walls of the club’s base crumbled under the weight of the gushing tide.

Mother-of-two Linda Boyle said she would have had to sleep in her car but for the generosity shown by the hotel on the Waterside, Derry.

“I panicked and tried to get a room but it was impossible to get anywhere. I want to thank the staff at that hotel because they were life-savers.

Despite the devastation and the financial cost of rebuilding homes and infrastructure, community heroes emerged.

Young men like Darren Whoriskey who spent the entire night around Burnfoot using his tractor to rescue people stranded in their cars and transporting sandbags to shore up homes.

Local Senator Padraig Mac Lochlainn said the people of Inishowen have been here before and would rise again against adversity.

“The people of Inishowen are resilient. They will do things for themselves and they will get over this. We will sit down and plan a route forward, but we do need Government assistance. We cannot simply rely on Donegal County Council because the need here is much greater.