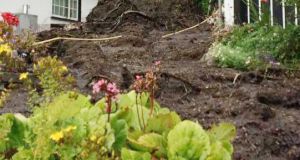 Bernie Kearney’s mud-covered house and yard at Urris in north Co Donegal: “I was hysterical. I just didn’t know what to do,” she says

A Donegal woman has spoken of her relief after managing to flee from her home just seconds before it was engulfed by a mudslide.

Bernie Kearney was sitting in her bungalow having her dinner just after 8.30pm on Tuesday. She heard a loud bang and watched as her entire kitchen was thrown across the room after her car was pushed through the side of her house by a landslide.

Terrified, she ran to the front door of her home in Urris but could not get out as it was locked and her keys were in the rubble behind her.

She managed to run into another room before jumping out a window on to her front lawn.

Dressed in just a T-shirt and trousers, Bernie was forced to stand in torrential rain as she desperately phoned neighbours and friends.

She said: “I was hysterical. I just didn’t know what to do. One minute I was sitting having my dinner and the next I heard a huge bang and my kitchen was coming in on top of me.

“I eventually got through to them and they arrived but it seemed like a lifetime that I was standing on the lawn in the torrential rain,” she said.

Ms Kearney, whose fisherman husband James died 22 years ago following a drowning tragedy, shares her home with her terrier dog. She said that just minutes before the mudslide happened, she was at the back of her home feeding the dog.

Photographs taken outside Ms Kearney’s home also show how a massive boulder made its way down the Urris Hills and landed at the back of her house.

“I’m very shook up thinking of what happened. But I might not have been here at all – I have to be grateful for that.

“If I was outside I would have been caught up in all that mud and it happened so quickly that I wouldn’t have had a chance,” she said.

She has lived in Urris for the past 30 years and says her home is destroyed.

“It’s ruined and I just hope that I am insured. The house will have to be knocked and rebuilt,” she said.

She said she will now move in with family or friends to see what can be salvaged from her home or to see if it needs to be demolished.