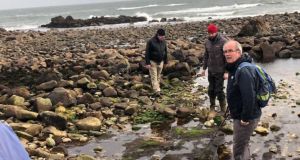 An archaeologist has said a site recently discovered in Connemara, Co Galway may have been a crannóg dating back over 4,000 years.

Michael Gibbons said the site by the sea appeared to show signs it was a previous dwelling. “There may have been a lake here in the Bronze Age . . . There are crannóga around here, further west, so people lived here,” he said.

A crannóg is a round dwelling built on a lake, typically found in marsh areas. Mr Gibbons said it would be very rare to find the remains of such a dwelling along the coast, due to the impact of rising sea levels over the centuries.

Mr Gibbons, who previously worked as an archaeologist for the Office of Public Works, said the possible dwelling could date between 4,000 and 6,000 years old.

Details of the archaeological find on the coastal location near Spiddal, Connemara, was first reported by RTÉ Raidió na Gaeltachta.

The site was discovered by a local man Jimmy Ó Céide while he was out walking by the sea after Storm Brendan.

“This is a very important site. It amazes me that a site of such interest is here, not far at all from the other one further west in An Liopa. They are not common in this part of the country, or indeed anywhere in Ireland,” Mr Gibbons said.

At “first glance” the wooden structure appeared to be a “crannóg type” dwelling, he said.

The structure appeared to be wider than a bog road but needed to be excavated and examined further, he said. “Sometimes you find a bog road like this in the middle of the county, around Ballinasloe. it may be a bog road, but I think it’s more likely to be a dwelling place,” he said.

The underwater unit of the National Monuments Service had been informed of the find and planned to visit the site in the coming weeks to investigate, Mr Gibbons said.

A Department of Culture and Heritage spokeswoman confirmed the location would be inspected, but said the “National Monuments Service cannot speculate on the nature of the site or any significance until that inspection has been made”.