‘This isn’t just the developers who are doing wrong – this is the Government, too’ 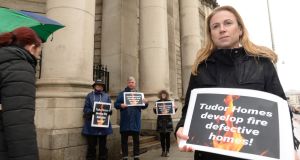 Ciara Holland stands outside the commercial court with a sign reading “Tudor Homes develop fire defective homes”, hoping to catch a glimpse of the developers as they enter.

It is November 2019 and Dún Laoghaire-Rathdown Co Council is facing legal action over its decision to grant planning permission to Tudor Homes for a 367-home development in Cherrywood – but that is not why she is here.

Ms Holland lives in an apartment in Galloping Green on the Stillorgan Road which was developed by Tudor Homes in 1999, but was later found to be replete with serious fire safety defects.

Owners there were asked to pay €16,250 each to remediate the issues after Tudor Homes refused to pay for the works citing the statute of limitations, which legally precludes them from liability.

Ms Holland paid the levy and the works to remediate her apartment were completed during the summer of 2019, with the remainder of remedial repairs around the complex currently nearing completion.

However, Ms Holland says she will not “just fix it quietly and go away”.

“You’re thinking about it all the time, it’s just a constant weight on your shoulders . . . just going to the protest was a relief to know that I was actually doing something, ” Ms Holland says.

“If I have to go to every single development Tudor Homes builds, if I have to spend every weekend protesting while there’s prospective buyers walking in, I will.”

When Ms Holland bought her two-bedroom apartment in 2006 she never could have seen herself spending her weekends like this.

She was single and without children when she bought the apartment for €515,000, but like many who bought at the height of the Celtic Tiger, she became trapped in it.

“I never thought I’d have two children and a husband in a two bedroom apartment, but that was just the way it was, I was in negative equity,” she says.

Fourteen years after she first moved in she is no longer in negative equity, but is now faced with a multitude of fire safety defects spread across the development.

A fire safety audit carried out by Omega in December 2017 found the development was not built in accordance with the council-granted fire safety certificate.

All of these gaps tunnelling their way around the development meant fire could travel much more quickly than it should, potentially giving residents very little time to escape.

Ms Holland becomes upset when I ask about the impact the defects have had on her day-to-day life.

“I brought my girls into this. I put them into bed at night and think, if there was a fire, am I guaranteed to get to them?

“Unbeknown to me they’ve lived all their lives in an unsafe home. They slept in their beds in an apartment that had fire deficiencies. My job as their parent is to keep them safe and minimise any risks to them . . . but this was a risk I couldn’t mitigate because I didn’t even know about it.”

“It’s so unjust,” she says. “You’re brought up to know the difference between right and wrong and you expect people to have integrity and morals and do the right thing . . . but this isn’t just the developers who are doing wrong – this is the Government, too, who are just turning a blind eye.

“That’s why I’m speaking out, because they don’t want us to, they want us to just fix it quietly and go away and I just wont put up with it.”

The Irish Times contacted Tudor Homes, but did not receive a response.

Dún Laoghaire-Rathdown County Council said that although it had responsibility for investigating building regulations complaints, there was a time limit of five years after the completion of the building works in which an enforcement notice could be served.

“Any issues which come to light in respect of Fire Safety concerns should be pursued through the Management Company in conjunction with the Fire Services Act 1981 & 2003,” the council said.