Plans for over 8,000 new Dublin homes to be published in weeks

Response to housing crisis: New Dublin suburb to be created in Clonburris

200 new homes are currently being built in Adamstown, Co. Dublin, after clearance and funding for construction has been granted. Olivia Kelly reports. 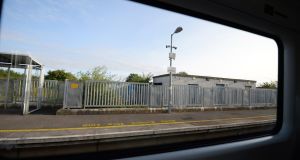 The unused Kishogue Train station, near Adamstown and Clonburris. The new suburb will at its closest point come within metres of Adamstown. Photograph: Alan Betson

Plans for a new Dublin suburb of more than 8,000 homes catering for a population the size of Wexford town, will soon be published by South Dublin County Council.

Approximately 280 hectares of land at Clonburris, to the east of Adamstown along the Dublin-Kildare railway line, has been designated a strategic development zone (SDZ) to tackle the capital’s housing crisis by providing 24,000 homes using “fast-track” planning.

The largest landowner in Clonburris, Cairn Homes, said it would be in a position to start building there early next year and that it could provide homes costing less than €300,000. The firm would “like to be onsite today” predominantly building “family houses”, it said.

The Society of Chartered Surveyors Ireland (SCSI) has put the cost of developing a typical three-bed semi in Dublin at more than €330,000.

The council’s director of planning, Eddie Taaffe, said the land could generate more than 500 homes a year, making a steady stream of housing available for between 10 and 15 years.

The new suburb will at its closest point come within metres of Adamstown, the State’s first SDZ and effectively first new town of the 21st century, which is just over 15 per cent complete.

With Adamstown, Lucan, and Clondalkin already suffering severe daily traffic congestion, concerns have been raised locally that the road network cannot cope with the additional traffic of Clonburris.

About 200 hectares of farmland at Clonburris was designated for major residential development more than a decade ago. A high density “eco-district” of up to 15,000 homes, mostly apartments, was planned, but was predicated on the development of the Metro West rail line, which was shelved in 2011.

No development took place on the lands, and in 2015 the then government identified Clonburris as a key site for much-needed new housing provision.

Following several delays the council said it will be ready to publish the draft SDZ next month. Once the zoning is in place the council will be able to grant permission for developments which cannot be appealed to An Bord Pleanála, allowing construction to start two months after an application is made.

The landholding at Clonburris has been extended to 280 hectares, about 60 hectares larger than Adamstown. However, Mr Taaffe said the density of development will be considerably lower than previously planned.

“We’re looking at just over 8,000 homes, which translates as 22,000-24,000 people. It’s the size of Wexford town, effectively a new Wexford town bolted on to Lucan and Clondalkin.”

Unlike Adamstown the council owns 35 per cent of the land, a “big chunk” of which will be a park, Mr Taaffe said. He said he was confident the remaining landowners, all established developers, could deliver housing and he said he expected the plan to be adopted within the next year.

Cairn Homes, which has a quarter of the site, said it was ready to start building almost immediately.

“Dublin is in the middle of the worst housing crisis of its history with the biggest demand and need for affordable home and we would like to be on site today, building well-built competitively priced new homes,” Ruchika Hassan, Cairn’s director of sales and marketing, said.

The SDZ must be approved by councillors before it becomes operational. Fine Gael councillor William Lavelle said traffic concerns could make councillors reluctant to sanction the plan.

“West Dublin is choked with traffic. It will be a very hard sell to councillors to persuade them that another 8000-9,000 houses is a good idea.”